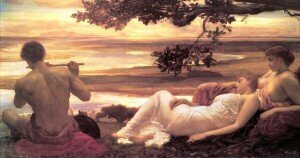 When we think of an ‘idyll’ we think of a peaceful and happy time. In music this doesn’t all have to be set in the happy land of major, we need that darker minor side to set the major into perspective.

And so does Frank Bridge. In his 3 Idylls of 1906, he starts his string quartet off in a dark minor key, which moved into a lyrical and serene major key in the middle and returns to the minor side at the end of the movement again.

Bridge: 3 Idylls: I. Adagio molto espressivo (Maggini Quartet)
That dark ending sets us up for the sweetness of the second movement. It still carries the dark flavour of the first movement, but in its slower majesty, seems to show us playful shadows darting below the surface. Light comes and goes.

II. Allegretto poco lento
The third movement bring the cheerfulness back again. We see Bridge’s own expertise as a string player come to the fore here and perhaps even hear a hint of Ravel in the music. Nonetheless, this is pure Bridge, who was a strong English rival to the French master. 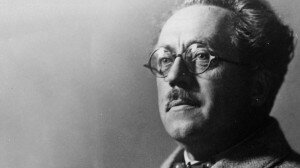 Frank Bridge (1879-1941) studied at the Royal College of Music and was a violist in a number of string quartets, a sometime conductor, before taking up composition full time. He was a teacher of Benjamin Britten, who paid homage to his teacher by using the theme from the 2nd Idyll as the source of his Variations on a Theme of Frank Bridge of 1937.

Britten: Variations on a Theme of Frank Bridge, Op. 10: Introduction and Theme (I Musici de Montreal; Yuli Turovsky, cond.)
The 3 Idylls are very much a product of Bridge’s youth, and as he grew as a composer, particularly in the period before WWI, his style became more and more modern, finally coming under the influence of Stravinsky and Debussy.

Today, little of his work remains in repertoire except for many of his short pieces for organ, but his works show an interesting development in English chamber music writing. Around 1908, he started to set English songs for string quartet. The dramatic beginning, for example to An Irish Melody, is a surprise for the melody that finally appears, the familiar “Londonderry Air.”

Bridge: An Irish Melody (Maggini Quartet)
This is music written by someone who has played far too many poor transcriptions of popular songs. With the dramatic opening and the off-hand appearance of the main melody, he makes us hear the song with different ears. The little counter melodies, the way the melody is broken up, the way each voice makes its own appearance shows us a master of the 20th century string quartet.