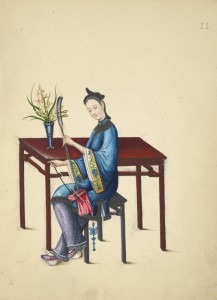 Woman Playing the Erhu or Jinghu

We are very familiar with the instruments of Western classical music, most of which appear in Western orchestral music. This new series will look at musical instruments outside the American / European tradition, beginning with China. 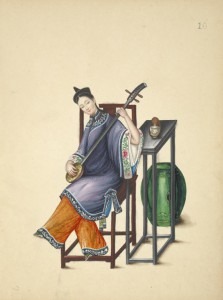 One of the most common instruments is the two-stringed Erhu. In Mandarin, the word ‘er’ means ‘two.’ If you look closely at the picture, you’ll see that the bow hairs are behind the strings. There’s no instrument in the west that is played from the back of the strings in this fashion. 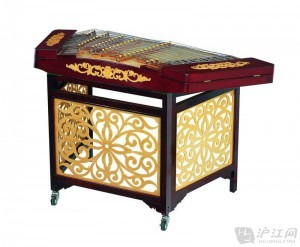 You can hear how the different bowing technique, combined with the greater freedom provided by the placement of the instrument vertically, allows the player to have a freer hand with expression.

The Sanxian, a three-stringed lute (san = three), has a small body covered with snakeskin. This plucked instrument has a brighter sound than the erhu. 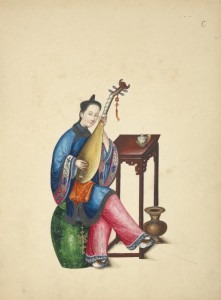 The Yangqin is an instrument with many western parallels. The shape of the instrument is a trapezoid (like the Western zither) and has up to 144 strings arranged in courses of up to 5 strings per course. The greater number of strings per course, the louder the instrument. The strings are sounded by striking them with long hammers, faced with rubber, made of bamboo – each side, bamboo or rubber, can be used and each has a different sound. 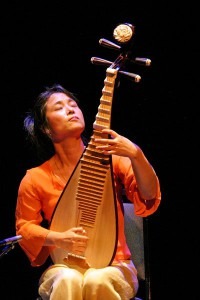 Deng Wei-min and Guo Ming-qing: Festival Below the Tianshan Mountains (Cao Xiao-hong, Yangqin; Shanghai Virtuosi; Xia Fei-yun, Conductor)
One of the most famous of the Chinese Silk Instruments, and one of the few that has made an appearance in Western repertoire, is the Pipa. Unlike the Western lute, to which it is most often compared, the fretted pipa is played with the instrument in a vertical position.

Tan Dun: Pipa Concerto: II. Allegro (Wu Man, pipa; Moscow Soloists; Yuri Bashmet, Conductor)
The two syllable that make up the name ‘pipa’ indicate the way it’s played: “pí” is to strike outward with the right hand, and “pá” is to pluck inward towards the palm of the hand, and as you listen to the Pipa Concerto, you will hear both the striking and plucking actions. 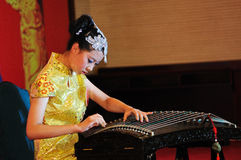 The Guzheng (or Zheng) is a plucked zither with 18-21 strings. The bridges under the strings are movable so that tuning the instrument can be accomplished very easily 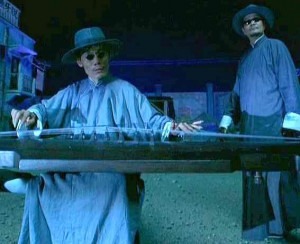 Zhang Lie: Romance under Moonlight (Zhang Nian-bing – zheng)
In the 2004 move Kung Fu Hustle, an assassin sits down at a zheng and plays a fierce melody and at the same time uses the strings to fire deadly blades at the heroes – one of the few times when you’ll see musical instruments used as weapons!

These are just a sample of the many kinds of stringed instruments in the silk category – there are many more to be discovered as you venture into the world of Chinese musical instruments. Next time: Bamboo Instruments.