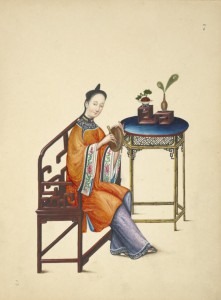 The last group we’re going to look at are Hide instruments, or, to put it in a more familiar way, drums. These can be large drums the size of kettle drums to small hand drums that you spin in your hand and little pellets hit the drum head. 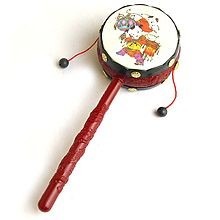 Drums come in all sizes and it’s their size and structure that gives the drums their sound and pitch. In the following video, there are two types of drums being played: the Huapengu, a flowerpot shaped drum with an animal skin drum head, held onto the drum by a set of nails. As the performer plays the drum, you’ll hear him use the nail heads as another kind of percussion instrument. The middle 4 drums are Paigu, which are pitched drums that come in sets of 3 to 5. These drums have a modern western-drum fitting for the drum head.

This video shows a whole range of different drums.

You’ll recognize the huapengu and paigu, but now there are also several sizes of barrel drums, with the biggest being the Zhangu or war drum. These are recognizable because of the metal rings on the size of the drum. When played in concert, the drum sits on a stand. When played as part of the army on the move, it took two men: one to carry the drum on his back and the other to strike it. Now when it’s played as part of parade for ceremonies such as the lion dance at Chinese New Year, it’s carried around on a little cart that holds the drum at just the right angle.

Drums are some of the oldest instruments we have – from banging on hollow logs to banging on skin-head drums, it’s all still with us today. In Chinese opera they are important instruments and are also used for many kinds of religious ceremonies. Every Chinese temple has its large drum, to be part of ceremonial parades and to be struck in the daily ritual.