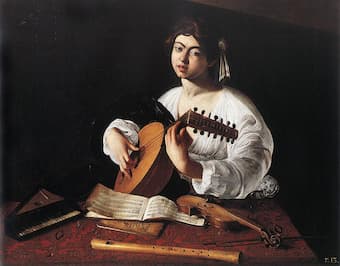 Film director Martin Scorsese commented in 2005, “If Caravaggio were alive today he would have loved the cinema; his paintings take a cinematic approach… He painted religious subject matter but the models were obviously people from the streets; he had prostitutes playing saints. There’s something in Caravaggio that shows a real street knowledge of the sinner.” Early in his career, Caravaggio crafted three paintings for his patron and host, the cardinal Francesco Maria del Monte, and his friend and neighbor, the banker and art collector Vincenzo Giustiniani. These famous paintings, the Musicians and two versions of the Lute player depict musical situations. They have been readily interpreted by critics and scholars, “illuminating specific aspects of Caravaggio’s and his patron’s life.” Furthermore, they are seen as “portraits, concerts, or allegories of music, showing lyrical momentariness, theatrical performances, classical enactments, and homoerotic allegories of love.” 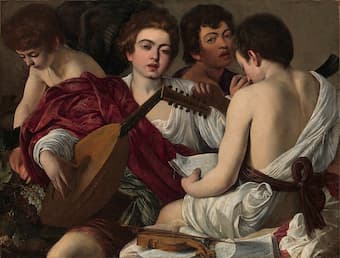 Caravaggio: The Musicians or Concert of Youths

To be sure, the paintings are able to exceptionally convey the musical experience, and scholars have “compared the portraits to musicians by other painters.” Given the informality, intimacy and sensuality of the depictions, they are said to “be a unique and effective representation of the character of the real musical experience.” We do know that Caravaggio’s patrons regularly hosted musical performances for circles of friends, and contemporary critics regarded them as “nothing more than depictions of musicians.” More recently, there has been a lively debate as to whether these paintings are to be “understood as mainly allegorical or not.” Given Caravaggio’s penchant for realism, scholars have argued that the paintings disclose portraits of contemporary musicians. It is thought to be “a rendering of a musical performance situation with highly realistic details on the level of the instruments, playing and singing technique, notation and repertoire, and performer physique.” And what is more, Caravaggio might actually have painted himself as the cornetto player in the back of the Musicians. 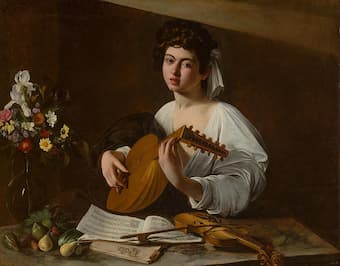 On the allegorical side of the argument, critics had seen the “fruit and flower as symbols of pleasure, sin, and love. And since some of the fruit is partially rotten and blemished, it might indirectly reference human mortality. As allegories of both music and love, “the three women typically representing Musica are replaced by boys.” This has led to the suggestion that the paintings have a homoerotic content and “are connected to possible signs of Del Monte and Caravaggio’s homosexuality.” A further level of interpretation asserts that the figures are not musical performers, but improvised theatrical characters, as was the fashion at the Baroque courts of the time. The scores seen in Caravaggio’s Lute Player have been identified recently, and feature a selection of Jacques Arcadelt’s Primo libro di madrigal, first published in Venice in 1538. The second Lute Player in turn, looks at madrigals by Francesco de Layolle and Jacquet de Berchem. 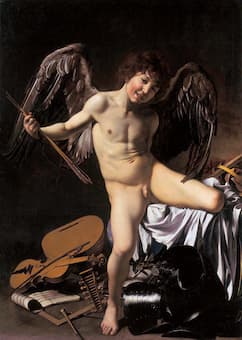 The music painted in the Musicians is sadly illegible. Scholars have asserted that the music “already had to have been considered old-fashioned at the time when the paintings were made, but that it was still preferred to the moderns.” It seems, that Cardinal Del Monte preferred music that was highly popular at the time and easy to sing by amateurs. The featured instruments—lutes, recorder, spinettini and violin—may hold symbolic meaning, but “they all comply with the musical tradition of the included sheet music.” Caravaggio was a man of many faces. His music paintings appear to celebrate love, but apparently describing the sorrow of love rather than its pleasures. The sensual qualities of Caravaggio’s music paintings are unmistakable, and have predictably led to homoerotic interpretations. It is doubtful, a critic wrote, “that the pictures were intended to convey and explicit sexual meaning.” Looking at “Amore Vincet Omnia,” which dates from 1601/2, I am not entirely convinced. According to some writers, “Caravaggio’s bisexuality can be established with some certainty,” and there “is a strong likelihood that Cardinal del Monet was homosexual…this may have influenced his tastes in the art he commissioned.” The Caravaggio paintings “bring musical experience to another level by embodying the Baroque multi-sensory performance.” Seemingly, the paintings represent music itself and the painter “prefigured developments in the visual arts, and also music.”