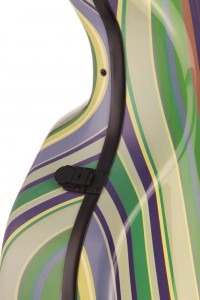 Would you believe that instrument cases have a history as long as the violins they contained? Instrument owners of yesterday, especially royal proprietors, saw fit to envelope their precious violins in ornate packaging. You wouldn’t dream of putting your priceless violin into a beater case nor did players of previous times. The workshops of 17th and 18th century makers including Stradivarius, made cases that today may be as rare as the violins they carried.

Today we have several choices of companies, which make attractive multi-colored cases that are built to withstand modern day travel and the vagaries of weather changes (we hope.) I covet the Bam pastel striped cello case, I admit, a limited edition. It’s the ultimate cello case, weighing only 2.9 kgm (3½ pounds), slim, (like I’d like to be) and it’s high-tech—made of triple ply material guaranteed to be protective and strong. 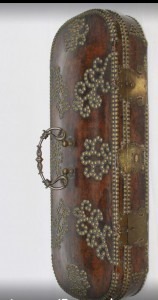 It took the sleuthing of collector and researcher Glenn Wood to bring these gorgeous rare cases to light. His book The Art & History of Violin Cases, traces the evolution to the more lightweight and portable coverings we have today. The publicity blurb for the book opens with a great line—”A King, a Tsar and a Messiah have one thing in common; they each had a violin case custom made for them.”

Wood’s parents discouraged him from a career as a violinist. Despite becoming a scientist, his first love was music. One day he stumbled on a violin case that was dated in the early 1700’s. With some hasty research he soon found out that although there are myriad articles about scientific subjects, there were no books about violin cases. Knowing he could never afford a Strad violin, he set out to acquire, categorize and collect violin cases. His book is a feast for the eyes. 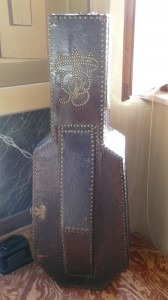 The two beautiful cases pictured were crafted during the 17th and 18th century in Northern Italy. Hand-made decorative nails held the leather covering onto the walnut wood case, the style Stradivarius used. He had the tools and know-how to craft cases which feature the exquisite decorative effect of twelve hundred hand made nails and wrought iron hinges that took almost as long to make, as actually carving the violin. (Chi Mei Museum, Taiwan) 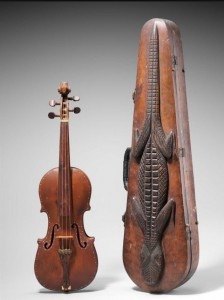 Each case tells a compelling tale: Mad King Ludwig II ruled Bavaria from 1864 until 1886, a time when craftsmanship was at its apex. He had a violin. Although its’ location is unknown, the monarch’s violin case is safely secured at the Library of Congress. 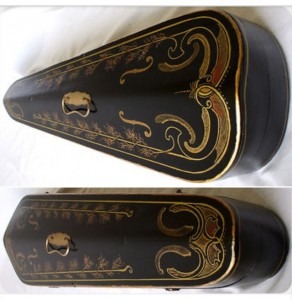 The so-called Apostle violin cases—a set of twelve cases made by W.E. Hill and Sons for their most important clients housed valuable Stradivarius violins. Inside the décor included striking, lavish, luxurious materials—so expensive that they had to discontinue making them. 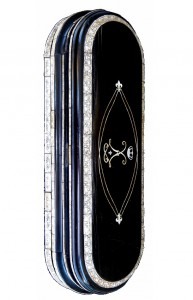 Sometimes one can stumble upon unusual cases, which show a fascination with exotic animals, as seen in the “Antiques Road Show” YouTube—an alligator skin covering, as well as the case with an elaborate lizard design. A decorative 19th century “coffin” case was recently on e-Bay. 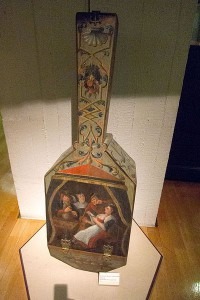 Louis XIII of France’s cases for ‘Les 24 violons du Roi’ (the King’s 24 violins) features “ivory inlay has been used to form an ‘L’ monogram surmounted by a royal crown with a fleur-de-lis below and two either side,” from 1626, according to STRAD magazine, in their October 2014 issue, And the double violin case lavishly decorated “with mother-of-pearl and lacquer during the Meiji period in Japan, was presented to the German violinist August Koempel in 1862. An engraved metal plaque inside the lid commemorates the occasion. 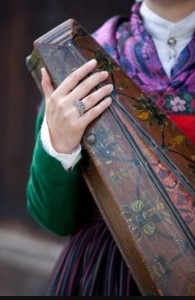 Cello cases often made of heavy wood were ornately painted, like these two cases the first from 1720 but tough to transport! 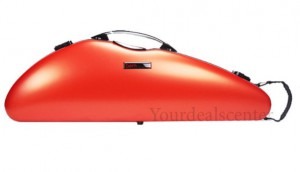 Today in Cremona, Italy, formerly the home of Stradivarius and many other workshops of legendary violinmakers, is a company that makes just as elegant cases but with high tech features. Mr. Musafia uses the most luxurious materials such as silk, velvet, satin and silk piping, decorative cherry wood, while incorporating protective and practical considerations for his Enigma line of violin cases—a hydrometer, protective suspension or “pressurepoints”, a large music flap, three compartments for housing your shoulder rest and rosin, a pencil holder, four bow holders, tropicalization, which controls temperature, weather guards, which ensures that the case seals tightly and a lifetime warranty. Customizations and personalizations are possible. 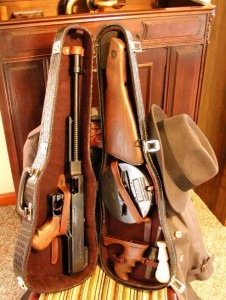 Cases have become sleek, with modern-looking styles and great colors. Sometimes others are jealous. It is now not unheard of that our cases are co-opted for other purposes! “Whatcha got in there a machine gun?” You may be surprised.