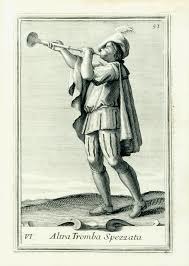 In the nearly 300 years that separate us from Bonanni, a number of instruments have faded from our daily use. One such instrument is the slide trumpet. 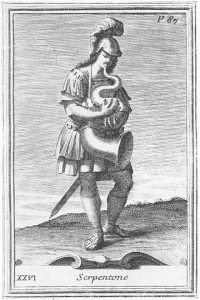 This trumpet had a slide attached to the mouthpiece end that would enable the player to make the instrument shorter or longer and so increase the number of pitches that it could potentially play. Known to Bach as the “Tromba di tirarsi,” it was called for in several of his cantatas but seems to have vanished by the end of the 18th century.

The Serpent was a wooden instrument made in a sinuous form. Played like a trumpet, it was invented as a kind of soft trumpet for use in church music. 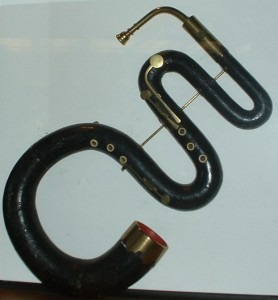 The instrument was made from wood and then covered in a dark leather to keep all the wooden parts together. In this work by Frescobali you can hear the serpent as the soloist – its indistinct sound was later replaced by the tuba as the low voice. In England, however, the serpent remained a church instrument through the early 20th century. 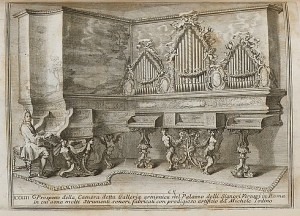 The instrument maker Michele Todini actually made this massive combination instrument consisting of a harpsichord and three spinets. Any of the four instruments could be played separately or could also be played in any combination from one keyboard. The instrument was later installed in a palace in Rome where it was seen, but not heard, by the music historian Charles Burney in 1770. A spinet was a kind of small harpsichord. 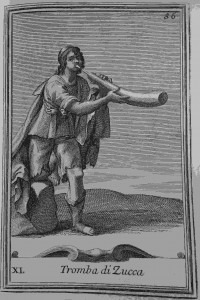 One amusing instrument in Bonanni’s collection is the “Tromba di Zucca” or Zucchini trumpet, made from hollowing out a big zucchini or marrow and then inserting a single-reed mouthpiece (like a clarinet’s) into one end. This is supposed to be an instrument of the countryside.

Another countryside instrument is friction drum, which is played by pulling a stick in and out of the drumhead. 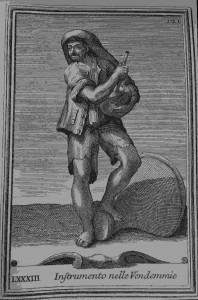 This instrument can be seen in Jan Miense Molenaer’s Two Boys and a Girl Making Music, where one boy plays the violin, the girl plays percussion on a soldier’s helmet and the other boy plays the friction drum. 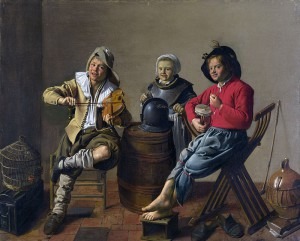 The friction drum is called for in a couple of modern works, such as Edgard Varèse’s Hyperprism from 1924 and Ionisation from 1933. In Ionisation, you can hear the drum around 01:00. Ionisation, written for 44 percussion instruments, was the first concert work solely for percussion,

Varèse: Ionisation. (Percussive Planet Ensemble; Martin Grubinger, Conductor)
Bonanni, in presenting all the instruments he knew, either from contemporary use or from historical documents, gave us a valuable look at instruments, often how those instruments were played (although sometimes he gets them backward), and we can see today what’s been lost, what’s been replaced, and what still remains.