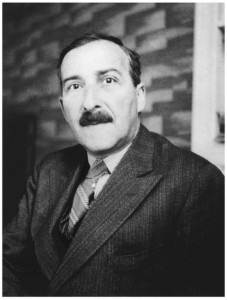 The Austrian writer Stefan Zweig (1881-1942) was one of the most famous international authors in the 1920s and 1930s, but the advent of National Socialism in Germany caused the author to flee to New York and from there to Brazil, He and his wife committed suicide in 1942, despairing over the problems in the world and the uncertain future he saw for Europe and its culture.. He loved music, particularly as he found German language to be more and more fraught with political problems as the Nazi regime continued.

In music, he was known for his association with Richard Strauss, for whom he wrote the libretto to his opera Die schweigsame Frau (The Silent Woman). The story is an update of a play originally put on the Roman stage by Plautus (251-184 BC). A retired sea captain’s ears hurt and he needs a silent life. Interested in getting married, he asks his nephew to find him someone. Anxious about losing his inheritance, the nephew (who happens to run an acting troupe), has his actresses ‘try out’ for the part of wife. Eventually, Morosus the captain selects Timidia, a modest and shy woman, who also happens to be the nephew’s wife. Once ‘married,’ the captain is shocked by the noise in the house: there are arguments, rooms are wrecked, carpenters hammer nails, and a singer and pianist practice opera. Finally, the nephew reveals that all is a sham and the captain forgives everyone, and closes the opera with “A rare delight it is to find a silent, beautiful girl, but it is more delightful when she belongs to another man”.

Strauss: Die schweigsame Frau, Op. 80, TrV 265, Act III: Wie schon ist doch die Musik (Thomas Quasthoff, bass-baritone; Orchester Der Deutschen Oper Berlin; Christian Thielemann, cond.)
Strauss had to fight the German authorities to have Zweig’s name on the programme; after its Dresden première, the opera was banned after 3 performances, caused largely by the anti-government letters Zweig was sending to Germany that were being opened by the censors. The opera was revived after the war, first in Dresden, its original home. 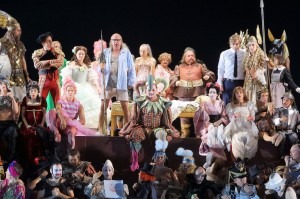 Relatively little of Zweig’s work was set to music aside from the libretto he did for Strauss. One poem, set by Max Reger, is Ein Drängen ist in meinem Herzen (An Urge is in my Heart). It begins with a fiery opening, as the poet describes the great love that he had, and then calms, as his love has departed and all he has left are his tears. Reger’s setting captures the emotional switch beautifully.

Reger: 4 Lieder, Op. 97: No. 3. Ein Drangen (Iris Vermillion, mezzo-soprano; Peter Stamm, piano)
The greater musical legacy left by Zweig, however, was the music manuscript collection he assembled. Much of it was dispersed when he left for America in 1934, but he kept the highights of the collection with him. In 1986, his heirs donated it to the British Library where it is on exhibition now until 11 June 2017. His music collection includes manuscripts by, of course, Richard Strauss, and by earlier masters including Mozart and Schubert. He has a cantata by Gluck, Mozart’s own thematic catalogue of his music, and sketches for Stravinsky’s ballet Pucinella.

There has been a resurgence of interest in Zweig and his once-famous novels, but some find it difficult to get used to a writing style from the 1920s and ‘30s, many finding it a bit superficial. Nevertheless, his contribution to literature and to music must not be underrated.