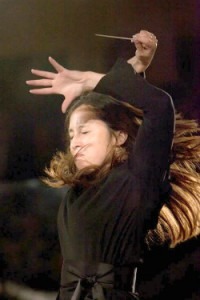 I had the pleasure of attending the Berkeley Symphony Orchestra opening concert for the 2014/15 season—my first classical music concert since moving to the U.S.A.

The concert took place at UC Berkeley’s Zellerbach Hall. The building has a surprisingly small foyer and a fairly inconspicuous and minute cloak room compared to most European concert halls that I have visited. The hall itself is quite modern and, by the stage style, appears to also serve as a drama theatre.

The evening began with the executive director on stage naming—without notes—and thanking each and every season sponsor and key contributors. To my surprise, no announcement asking patrons to turn off their cell phones and not to use recording devices was made; and indeed no one appeared to have committed that faux pas the entire evening. Seeing the demography of the audience, however, considerable work is needed to promote classical music among youngsters. 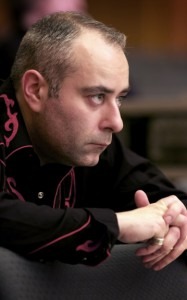 The composer Bettison was physically present and discussed on stage his composition with Joana Carneiro, the orchestra’s music director. He quoted Paul Valery’s famous words ‘La mer, la mer toujours recommencée’ (The sea, the sea always begins again), and hinted the dominant rôle of the strings. Indeed, the strings started and sustained the main effects throughout the piece. The brass and woodwinds took up more prominent parts near the end, and the piece finished on a note held by the flute. There were numerous time signature changes, generating different characters, but the mood mostly remained dark. It was an interesting piece, but not one with the imagery and imagination of Debussy’s ‘La Mer’ or Ravel’s ‘Ondine’. In the programme note, the composer did, however, say that he ‘[did] not intend for the piece to be a depiction of the sea, but rather a ritual tableau based on the process of shaping and reshaping—a constant cycle of beginnings.’

The violin concerto was played by American born Korean violinist Jennifer Koh, shared second prize winner of the 1994 International Tchaikovsky Competition (no first prize was awarded that year). Koh started solidly and continued at a high standard, although her antics of forcing the end of a phrase were a little distracting. Her technique was excellent, but she somewhat failed to impress in the four very difficult double thirds passages in the third movement. The overall pacing was to me a little too steady, lacking the freedom of agogics; and I did not feel moved by the mood. Contrary to perceived custom elsewhere, the American audience applauded between movements, with someone even cheering the female artist with ‘bravo’. 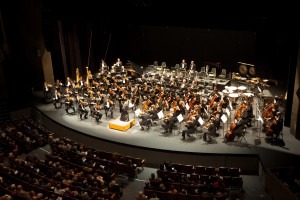 After the intermission was Elgar’s Enigma variations, ‘an easy choice given the British nationality of Bettison’, according to the music director. (Perhaps implicitly suggesting a lack of violin concerti by British composers?) Interestingly, maybe because of this association, the strings managed an outstanding flow and continuity which was emphasised by Bettison. The double basses led by Michel Taddei deserved, I thought, special credit; and I was disappointed to see that the conductor did not acknowledge them during the curtain call. On the contrary, the brass was a bit too by-the-beat and rigid, and the clarinet and oboe certainly failed to be humorous and playful in Dorabella. I recall having seen a master class by John Carewe, Sir Simon Rattle’s former teacher, who told the students that a conductor only needs to push the orchestra in the crescendo; once in the forte, the orchestra will keep going and there is no need to conduct frantically! Carniero, in her style, conducted tirelessly but, in my opinion, sometimes too choppily and needlessly hard. However, given the flowing mood and excellent phrasing conveyed by the strings, I guess the communication with orchestra members during rehearsal is more important for a conductor than the conducting style in a concert. In that sense, it was a sufficiently successful performance, and I will likely return for another concert by the Berkeley Symphony Orchestra.