Opinion
Should I be applauding now?
by Frances Wilson June 17th, 2018 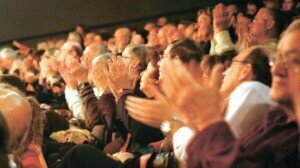 Every year, around the time of the start of the BBC Proms, that wonderful 2-month long festival of music, the thorny issue of when to applaud rears its head. In fact, the debate over the appropriateness of applause is ongoing, but it seems to become more vociferous during the Proms season. And why? Because at Proms concerts clapping may be audible between movements!

In a way, the Prom concerts are not like other classical music concerts in the UK. Originally conceived by Robert Newman and Henry Wood to introduce classical music to a wider audience, the atmosphere at Prom concerts tends to be rather more relaxed, though often no less reverent, and the audience demographic far broader than at, say, London’s pre-eminent chamber music venue, the Wigmore Hall. The Proms attracts the classical music newbie and the committed classical music geek, who goes to every single concert in the season, and in between a whole host of other people who enjoy the Proms experience. The etiquette of the classical concert is less rigid at the Proms – it’s much more “come as you are and enjoy yourself”, but in spite of this, the issue of applause remains a tricky one.

The custom of not applauding between movements of a symphony or concerto or other multi-movement work developed during the latter part of the nineteenth century. Both Mendelssohn and Schumann made attempts to prevent audiences from applauding between movements. Mendelssohn asked that his ‘Scottish’ Symphony, premiered in 1842, should be played without a break to avoid “the usual lengthy interruptions” and Schumann took charge of the matter in a similar way in his piano and cello concerti as well as his Fourth Symphony, but it was Richard Wagner who really instigated the custom as we know it today during the premiere of his opera ‘Parsifal’. By the turn of the twentieth century the concert hall had become the hallowed place it is today, and the conductor Leopold Stokowski even went so far as to suggest clapping be banned altogether lest it interrupt the “divinity” of a performance. Now if one dares to applaud between movements one may be met with angry hisses of opprobrium, shushing, tutting or very stern looks. 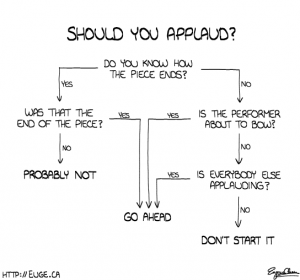 Some concert-goers regard applauding between movements as ignorant or boorish behaviour, an indication that you do not know the music properly (while the aforementioned concert-goers clearly do!). For some it is downright sacrilegious. Others regard it as disrespectful to the performers or disruptive because it can interrupt the flow of the performance. The curious thing is that this attitude would have been totally alien to Mozart or Beethoven, Brahms or Grieg. In an earlier age, concerts were noisy affairs, the music played to the accompaniment of people talking and laughing, eating and drinking, and wandering in and out of the venue. Applause was given freely and spontaneously, indicating appreciation and enthusiasm for the performers and the music. There was numerous applause during the premiere of Grieg’s piano concerto, while Brahms concluded his first piano concerto was a flop because there was so little audience response (except for the hissing, that is). Today the pauses between movements are often filled with the sound of people coughing or unwrapping cough sweets, and applause is reserved for the end of the work being performed.

“I am more bothered by those rare times when people feel the need to rush in to applaud at the final note of a piece without regard for the mood if it is a quiet ending,” – Marin Alsop, conductor

For the ingenue concert goer, knowing when to applaud can be stressful. I attended an all-Brahms Prom a couple of years ago, conducted by Marin Alsop, and shared a box with a family who were attending the Proms for the very first time. We got chatting and after some pleasantries about the programme and the performers (the Orchestra of the Age of Enlightenment), one of the party said “We’re really worried about clapping in the wrong place!”. I assured him that it didn’t matter at the Proms, and that he could clap when I did if that helped. I thought it was rather sad that these people, who really enjoyed the concert, felt so anxious about something so trivial, and it is this anxiety about how to behave, and specifically when to applaud, which inhibits some people from attending classical music concerts.

The current director of the Proms, David Pickard, declares that he “loves” hearing spontaneous applause at concerts, while some die-hard concert goers are horrified by his attitude, regarding such behaviour as “barbarous” on the part of other audience members. The curious thing is that at opera no one gets upset if you applaud after a particularly beautiful aria or chorus set piece, and it is almost de rigeur to do so. Ditto in jazz concerts, after some sparkling improvisation or a fine solo by one of the musicians. And conductors and musicians can of course control when applause occurs through their body language: a conductor may keep the baton raised aloft for a period of time after the last notes have faded away, or a pianist may keep his or her hands “in play” over the keyboard, defying anyone to break the spell with premature applause.

“Music evokes emotions and people should be able to express them freely – with respect to the performers of course,” – Kirill Karabits, conductor

In addition to the issue of when to applaud, there is also the how of applauding. Some people seem desperate to applaud almost before the final notes have sounded (this is common at Prom concerts) and it does lead one to wonder whether this is in fact a form of attention-seeking, a “look at me! I know this piece so well I know exactly when to applaud!”. For some this can be really intrusive, especially at the end of the very intense or profound work. Sometimes, as if collectively impelled by an unseen force (in fact, the power of the music), there is a period of silence after the music has ended, and a sense of the audience holding its collective breath, savouring what has gone before. And occasionally (especially in contemporary repertoire in my experience), no one is really sure when to applaud and the impulse to clap is led by a discreet member of venue staff.

At the Proms this year, it seems that the “applaud between movements” faction is gaining more currency. I attended a Prom performance of Schubert’s Unfinished Symphony and Mahler’s tenth symphony and there was applause – spontaneous and appreciative (to my mind) – between every single movement of both works (though as some wag suggested since both works were unfinished, perhaps members of the audience applauded because they didn’t know when the work had ended!), and other Prommers have mentioned there is noticeably more applause between movements this year. For some this is not an issue, but for others it clearly is a problem. Whatever your view, the most important thing is to show appropriate appreciation for the musical performance and those who created it, rather than worrying what the person sitting next to you might be thinking about your concert etiquette!

Why not go the whole hog and bring back smoking, talking, eating and all the other disruptions that progress has excised – MR via Twitter

If given a choice between people coughing, the rustling of sweet papers, mobile phones beeping, and talking (!) during quiet movements (when did that become a thing?) or a rapturous applause in appreciation of the music I choose applause… every time – DO via Facebook