Events Reviews
Bach and Beyond – Avi Avital and Mahan Esfahani at the Bristol Proms
by Oliver Pashley August 10th, 2014 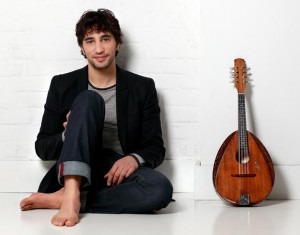 I arrive into Bristol an hour early, so I grab a quick coffee in the bar of the Bristol Old Vic Theatre, the recently-renovated landmark in Bristol’s cultural history. As I sit in the bar someone leans out a door and shouts to her colleague: ‘Yep, that’s fine – I can page-turn tonight! I’m not wearing very smart clothes though – will that matter?’ The excited response comes: ‘Of course not – it’s the Bristol Proms!’

This image of endearing informality was a theme that ran deep throughout the evening I spent at the Bristol Proms, watching a joint performance given by mandolinist Avi Avital and harpsichordist Mahan Esfahani. Around the theatre were posters advertising the main concert ‘rules’: you can take drinks into the theatre; you can clap where you want; you can take photos; you can’t tell anyone to be quiet.

The way these rules were displayed – and then echoed at the beginning of the concert by Tom Morris, the artistic director of the Bristol Old Vic, clearly showed the effort on the part of the Bristol Proms to attract an audience who wouldn’t normally think of attending a classical music concert.

While at first, during Avital and Esfahani’s first piece, the Bach Trio Sonata no.4 BWV1019, it seemed like this created more tension that it dispelled (it took a few minutes for everyone to realise it really was ok to feel relaxed), the problem was quickly rectified when both performers started chatting after the piece ended. The way they engaged the audience in a genuine, humorous way showed both musicians’ personalities off to the full, and, more importantly, showed everyone that classical music isn’t something elitist and disconnected. 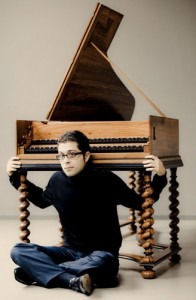 As the audience relaxed through the concert, the mood improved, and it felt like we began to buy into the anti-establishment aesthetic of projected close-ups of Avital’s soundboard or Esfahani’s fingers mid-piece. Most noticeable were the silences; because we didn’t have to ‘be quiet’ on command, a genuine silence meant a lot more. There was one such moment during a piece Avital himself composed, Kedma, where you could hear neither a pin drop nor a drink being slurped.

Half way through the evening, both performers revealed that they had prepared a ‘surprise’ piece, not in the programme, and of which not even the other knew. Esfahani performed a harpsichord showpiece, Rameau’s Gavotte and Variations, and Avital treated us to a rendition of a Hungarian folk song. Both were received with equal thunderous applause, the performers demonstrating the abilities of East and West to exist together effectively in the same concert space.

The performers were billed as using Bach as their ‘meeting point’, the common ground from which to diverge – Esfahani spoke of the ‘universality’ of Bach – but what was exciting about this concert was that Bach was not seen as the pinnacle of the programme around which revolved pieces of lesser stature. Of course, Bach can often have stuffy connotations, but these two ensured all the cobwebs were swiftly blown away, not only by giving lively and exciting performances but also, through using works by Toru Takemitsu and Avital himself, showing how a clear passion and commitment to music can generate an exciting concert of varied styles without it having a disjointed feel. It was not an evening of ‘Bach and friends’. It was a world tour of equally electrifying musical styles, presented passionately, and subsequently enjoyed by all.