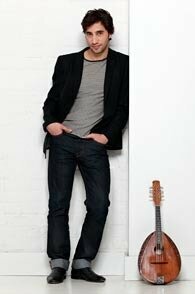 A Mandolin in Carnegie Hall? Surely not? But yes, it’s been done, in addition to Wigmore Hall and the Lincoln Center. Israeli-born Avi Avital is on a mission: to make the mandolin as at-home in the concert hall as the violin or piano. No longer the ignored distant cousin of the guitar, Avital is making the world sit up and listen to his fresh approach to this nontraditional instrument.

I’m sure you’ve never heard this question before, but… Why did you take up the mandolin?

He smiles. ‘Of course, I’ve never heard this question before!’ he laughs. ‘It was a coincidence. I was 8 when I first picked up the mandolin, after seeing it at a neighbour’s house – my neighbour played in the local mandolin youth orchestra. I liked to hear it played and I went to see lots of concerts given by this mandolin orchestra. When it came to the age at which I chose an instrument to play I wanted to play it.’

A mandolin orchestra – was this an instrument that was fairly popular where you grew up, then?

The mandolin isn’t the most conventional instrument! Do you think this will change?

‘I think the mandolin was somehow ignored by composers throughout history. It’s not that it wasn’t popular – in fact, it was the opposite… It was so popular that composers considered it too popular for the concert hall. Bach never wrote a single note for mandolin unfortunately!

‘We live in an era where it’s hard to make sounds fresh in the concert hall. We have amazing musicians, all with amazing interpretations of pieces. It’s hard to do something new – and this is why there’s a renaissance of the mandolin, because people are craving something new. One of my jobs is to adjust the historical error!’ he says, laughing, ‘To make composers write for the mandolin! In 100 years, I want there to be mandolin classics – the same way that the guitar, about 100 years ago, did not have any, but now we talk about Rodrigo and Piazzolla as staples of its repertoire.’

I asked Avital if he would ever consider one genre his ‘home’, given his recent cross-genre approach to his new album:

‘I had a very clear feeling recording Between Worlds. I wanted to explore, as this reflects my identity as artist. I wanted the album to reflect the nature of the instrument, that is its classical identity mixing with folk. There is a defined identity complex, and this ‘chameleon’ quality of the instrument is what I wanted to explore. I found a period in the first half of the 20th century where a surprising amount of composers had mandolins in their work. This was real integration, where the real material came from folk music, and they ‘composed’ it for the concert hall. Bartok, Villa Lobos, Piazzolla – they all did it! It was amazing to find this amazing list of repertoire that was already classic. It’s interesting because anyone nowadays you say ‘Romanian folk dance’ to has a vague idea of how it would sound. 100 years ago however, to someone sitting in Carnegie Hall listening to Schumann and Brahms, hearing these exotic modes from the Balkans must have been a very modern, exciting experience. What I try and do in the album is preserve this modernism that these composers had, just updated to 2014. The fun was to take it more to the folk side, to create a sonic world to resemble the instrument’s folk origins.’ 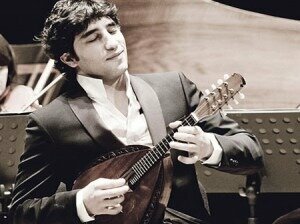 When asked his favourite composers, he replies ‘The list is much too long! This year I premiered a new piece by Syrian composer Kareem Roustom, and gave the premiere of a piece by UK composer David Bruce in Carnegie Hall.’ Following on from his comments about the guitar, I suggest that people wouldn’t have ever imagined a mandolin player gracing the stage of Carnegie Hall 100 years ago. He laughs back, ‘I bet they wouldn’t have imagined it FIVE years ago!’

‘The mandolin had a somewhat different course of history to other instruments. It didn’t require improvements, in the ways that, for example, the violin bow was improved, or how Steinway improved the piano. The mandolin had a very interesting development, in that if you go to the USA, they have a totally different style to that in Italy. There are different shapes and sizes all over the world, and they’re all continuously changing. I’m playing on an instrument by the Israeli maker Arik Kerman, and we’re still searching together on how to make the sound better and bigger.’

I ask if he has a main inspiration, and whether or not it has changed as he himself develops as an artist.

‘I feel that artists are people that produce art or practise art. There is always a maintenance of your spirit and soul that has to take place. I read books, I go to exhibitions, I attend experimental music concerts; I consume art all the time and it gives me inspiration. Although I finished my ‘official’ studies in 2004, I’m still always learning. For example, I was playing Klezmer with Giora Feidmann one time, but after we went off stage I always begged him for lessons about Bach!’

Avital’s passion for this picked instrument is infectious, and the personality bubbling away behind the new modernist album is one that is slowly changing the way the world perceives the mandolin, one Romanian folk dance at a time.