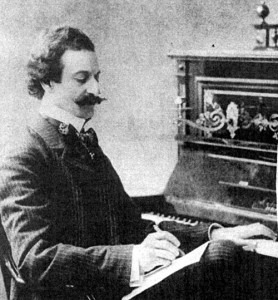 But, before that momentous 29 May concert, there was a concert two months earlier with a similar uproar. The conductor this time was Arnold Schoenberg and the concert in question was in Vienna, not Paris.

On 31 March, at the famous Musikverin large hall, Schoenberg was supposed to be conducting his chamber symphony and works by his students Alban Berg and Anton Webern, among other things.

The work that caused all the uproar was Alban Berg: Songs with Orchestra on Picture Postcard Texts by Peter Altenberg, Op. 4. The pieces are better known as the Altenberg Lieder and the concert as the Skandalkonzert for the riot that erupted during Berg’s songs. 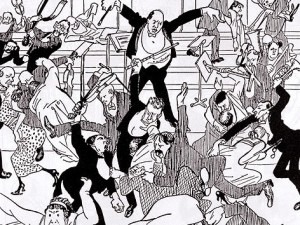 The Uproar at the Concert. This caricature from Die Zeit gives a flavor of the action Note Schoenberg in the middle, conducting as everything goes to pieces around him.

The Viennese audience, who had been insulted the previous month at the première of Schoenberg’s Gurrelieder when he refused to acknowledge their applause, came to this concert prepared to take their revenge. Armed with their house keys in their pockets, which they would shake to make their unhappiness palpable, the audience reacted during the Altenberg Lieder, yelling that both the composer and poet should be institutionalized (poor Altenberg was already in an asylum). This was insane music to lyrics by a madman, or so the audience thought.

Unlike Pierre Montreux in the Rite performance, Schoenberg stopped conducting. He shouted at the audience that trouble-makers would be removed by force, whereupon the whole audience erupted. Schoenberg is challenged to a duel and one audience member, the composer Oscar Straus, clambers over the seats so that he can punch the concert organizer Erhard Buschbeck.

The police arrest 4 people, the concert is stopped, and for Berg the concert had long-lasting effects. The songs were not performed again until 1952, and the full score did not appear in print until 1966 – 43 years later. For Oscar Straus, his contretemps with Buschbeck went to trial.