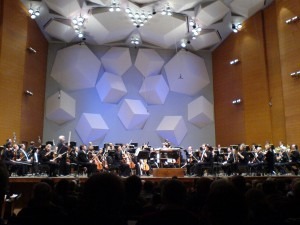 Musicians love audiences. The more of them there are, the merrier. Little do they know that they are as visible to us as we are to them. Audiences think that musicians are so immersed in their playing that we don’t notice their idiosyncratic behavior.

Audiences have personalities. In Minnesota perhaps in contrast to the harsh winters, audiences are nice. “Minnesota Nice” we call it. They applaud politely and unfailingly offer us an affable and self-conscious standing ovation. New York audiences are discerning but brusque. They listen with critical acumen; applaud with haste and then they dash out of the hall – a standing evacuation.


Audiences have their quirks. I recall a concert in the days when the cello section sat on the edge of the stage. The audience was to my left. I was playing principal cello. Right in front of me stood the conductor. We were playing the lovely but not often performed Elgar Symphony No. #1. Sitting right under the nose of the conductor, one has to concentrate very hard to watch both the conductor, the music and to relate closely with one’s colleagues. This is of course doubly important in a work that is relatively unfamiliar to the orchestra. The maestro could hear every note I played all the time!

The symphony opens very softly. Soon I could hear an irritating clicking to my left especially in the softest spots in the music. What could this sound be? It was certainly distracting. The first movement gains momentum very quickly, as the tempo and volume increase. Then there is an exposed cello section solo. I really couldn’t take my eyes off the music for a second so I had no opportunity to look over my left shoulder for what seemed an interminable number of minutes. Then finally, there were six and a half bars of rest. I glanced out of the corner of my eye. The first thing I noticed was a large wicker basket open on the floor between the first row and the edge of the stage. There, comfortably curled up in the first row, was a woman wielding knitting needles.

Audiences love being close to the action onstage. Some concert halls have seating behind and above the orchestra. The spectators delight in seeing the conductor’s face for a change, and they watch closely for interpretive insights. Conductors tend to be on their best behavior when the audience can see their facial expressions. Rather than scowling at the orchestra for any misdeeds, they are tempted to evince ecstatic expressions, add more visceral and intense body language to enrich the audience’s experience. Can you blame them?

In Minneapolis there have been a few occasions when the stage set up was rearranged to accommodate a few rows of audience members behind the orchestra. This was very popular with the audience, but the brass players had to tolerate people breathing down their necks and watching their music. Quite unnerving! Onstage seating ended abruptly one night when everyone noticed a young couple entwined in a passionate embrace right behind the percussion section. Perhaps they were inspired by Prokofiev’s Romeo and Juliette certainly gorgeous, amorous music. Apparently they were not aware that they too were onstage.

The great Beethoven 9th Symphony “Ode to Joy” is played often, virtually guaranteeing a full house and huge ovation. It is a large dramatic work, which requires virtuosic playing from the musicians, four great operatic solo voices and a large chorus, typically the bigger the better.

During the Holiday season we performed the work with an immense chorus, three hundred strong. Before we began, a pre-recorded announcement was piped throughout the hall “ Ladies and gentlemen, so as not to disrupt the performance, please turn off your cell phones. No photography, nor recording, is allowed in Orchestra Hall.” We proceeded to tune. The chorus filed onto the bleachers behind the orchestra in single file according to a pre-determined Peking order with a clear division between the sopranos, altos, the tenors and basses.

Approximately ten minutes into the work some of my colleagues noticed a small blinking red light in the third tier. We were certain that despite the admonition against filming the performance, someone in the audience was attempting to do just that. There are strict union rules about taping the orchestra. The concertmaster somehow signaled the personnel manager. The personnel manager rushed to call the head usher from backstage via a walkie-talkie. The individual had to be located as quickly as possible to stop him and to confiscate the tape.

Meanwhile, we proceeded. During a short break between movements a chorus member noticed that the individual singing next to him was someone he did not recognize. In hushed whispers he asked if the stranger had sung in the previous nights’ performance and in the rehearsals. He was wearing what looked like brand new tails, with a shiny cummerbund. The interloper, with a glow in his eyes responded, “I have always wanted to do this!” And the perpetrator recording in the third tier? He was apprehended filming his buddy’s Minnesota Orchestra debut.