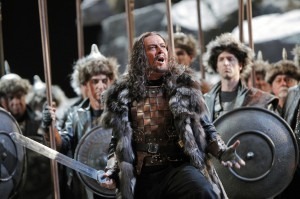 The conversation should have gone in another direction. After all, how often are you in the presence of Attila the Hun, and live to tell the story. Instead, when speaking to the legendary Italian bass Ferruccio Furlanetto, all I could think to ask was: “How do you pronounce Italian vowels when singing?” I went on: “Does the Italian ear picks up on whether the vowels are closed or open when sung? Is it really a big deal when a foreigner sings the vowels incorrectly? Does it affect the ear of an Italian?” Fearing decapitation or at the very least impalement, I was relieved when Mr. Furlanetto simply answered: “Of course it’s important, there are rules you know. Yet, at the same time the region I come from in Italy may pronounce things in a very different way from another”.

The afternoon before his last performance of the title character in Gabriele Lavia’s production of Verdi’s Attila at San Francisco Opera, I found myself in Mr. Furlanetto’s dressing room. He had agreed to hear a young Chinese bass-baritone, who had pulled me into the room, not able to find an accompanist. “I am not a teacher”, said Furlanetto, “I am only here to listen and give advice”. My Chinese friend plopped down on the piano Leporello’s “Catalogue Aria” from Mozart’s Don Giovanni and so we went on, him singing, me playing the piano. It went exceedingly well. “And now do you have something that a baritone would sing?” We scrambled through his aria book and found “Ah! Per sempre” from Bellini’s I Puritani. Furlanetto listened intently, often conducting along and ushering in musical utterances. When the singing was over, he advised not to climax too soon on the loud high note in Mozart. “You must approach the crescendo slowly. You must save the breath and connect the line after the fermata”. He complimented the singer’s rendition of the Bellini’s aria, noting great breath control. “I don’t hear any major problems, you are developing quite well”. After many thanks and several photographs the session was over. But not before I chimed in about those pesky Italian vowels.

The 9th of Verdi’s (1813-1901) 25 major operas, Attila was premiered in 1847. A rather young opera, it nonetheless gives the astute listener a perfect glimpse into the mature genius of Verdi’s later works. The tempest scene at the conclusion of the prologue is reminiscent of the brilliant storm scene at the outset of Otello (1887). The slave girls’ dance in Act II has strong hints of the gypsies’ music from La Traviata (1853). Odabella’s (soprano lead) melancholic music and slow harmonic movement remind us of Aida’s (1871) laments. Attila the opera, just like its subject matter, is an incredibly energetic galloping romp that is constantly aided by Verdi’s use of cabaletta form in arias. The solo arias or duets are first introduced by a cantabile, or song-like, rather slow introductions. Then, a theatrical or musical element is added. The demeanor and character change immediately and what follows is a rhythmically strong, rather fast section that culminates with fortes and thundering applause. There are no big battle scenes, but the tension is apparent through dozens of headless bodies impaled on spears in Attila’s camp at the beginning of the opera. Ezio (lead baritone), a Roman general, is unsuccessful in forming an alliance with Attila, even after he offers to give the Hun the world, if only Italy would be left to him. Finally, Attila falls for and is betrayed and killed by Odabella, an Italian slave girl from his own harem.

If you enjoyed Quentin Tarantino’s Inglorious Basterds, you will find Verdi’s Attila appealing. The attraction comes from putting historical figures in fictitious settings. In the film, Hitler is assassinated by a squad of American soldiers, which infiltrates enemy lines. In the opera, the great leader of the Huns succumbs to the vengeful sword of the woman he loves. Both warring leaders, and monsters in their own right, meet an operatically melodramatic end.