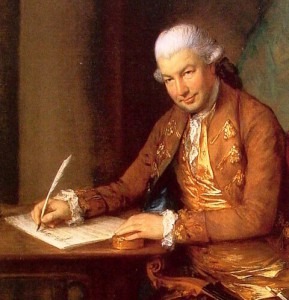 During his initial stay in London, which lasted from 23 April 1764 through 1 July 1765, young Wolfi regaled in the invigorating and stimulating musical environment offered by the British capital. A rapidly prospering and growing middle class not only created the demand for public concerts, music printing and publishing it also drove an explosively expanding keyboard and instrument manufacturing industry. Particularly, the emergence of public concert series provided composers with unique opportunities, and it is hardly surprising that a great number of continental masters eagerly flocked to England. The year 1764 saw the inaugural concerts of the Johann Christian Bach-Carl Friedrich Abel subscription series, originally organized by Theresa Cornelys at Carlisle House, Soho. By January 1765 the series was entirely organized by Bach and Abel, and had moved to Almack’s Great Room in King Street, St. James’s. Neal Zaslaw has suggested that young Wolfi “not only attended these concerts, but may even have been invited to participate in the performances because of his status as a virtuosic instrumentalist.” Be that as it may, Wolfi certainly copied some of the featured works for study purposes, among them an Abel Symphony. His copy led to one of the most famous misattribution in history. When scholars in the 19th century found an unknown symphony in Wolfi’s hand, they promptly catalogued and published it as his Symphony No. 3 in E-flat, K. 18. Subsequently, however, it was discovered that it was in fact the concluding symphony of Abel’s Opus 7. Since popular mythology surrounding Mozart continues to be incredibly resistant to change, it is hardly surprising that the composition continues to be performed and recorded under Mozart’s name.

The subscription concerts of 1765 also featured the symphonies Opus 18 by Johann Christian Bach. Because some members of this set highlight an unusual 4-movement design — expanding upon the customary 3-movements layout — Bach referred to them as “Grand Overtures.” These Overtures were, in fact, an import of modern German music originating with Carl Richter and Johann Stamitz and the orchestras in Mannheim. Not everybody in London was delighted by these foreign influences. Charles Avison articulated his aversion in his introduction to his Op. 8 sonata, “the innumerable foreign Overtures, now pouring in upon us every Season, which are all involved in the same confusion of style.” Critics spoke of a “wild luxuriancy of the new German style” and predicted that it had too little “elegance and pathetic expression” to stand the test of time. However, Charles Burney praised the inventive and unpredictable German idiom over the comfortable style of Italian music, and he clearly foresaw an important shift in instrumental conception and taste. 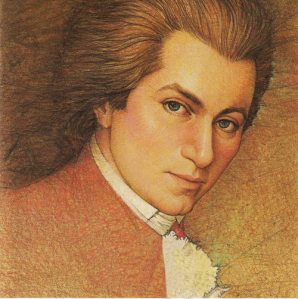 The Italianate style of J.C. Bach and Carl Friedrich Abel, tinged with the spectacular orchestral effects originating in Manheim exerted a lingering influence on the works Wolfi composed after his return to Salzburg. Neal Zaslow rightfully observes that “the young Mozart infuses a warmly Italiante style of compelling lyricism and graceful rhythmic movement with his Austro-German background, which added harmonic depth, textural interest, subtlety of phrasing and orchestral virtuosity. The eleven “Salzburg Symphonies” written between the ages of ten and sixteen can be divided into several categories, among them three overtures intended in the first instance for vocal works but later used as independent concert pieces, and five concert symphonies, among them K. 110 with minuets and repeated sections in all four movements.

None of these early Salzburg symphonies were published in the 18th Century. Leopold did offer them to Breitkopf in 1772, but relayed their rejections to his son in the following way: “It is better that whatever does you no honor should not be given to the public! That is the reason why I have not given any of your symphonies to be copied, because I suspect that when you are older and have more insight, you will be glad that no one has got hold of them, though at the time you composed them you were quite pleased with them.” By 1772, however, Mozart’s symphonic conception no longer relied on mere imitation, but he began to synthesize the various styles. Yet undoubtedly, the graceful melodic style, the balanced, symmetrical and contrasting phrases and the firm foundation in strict counterpoint he discovered in the works of Johann Christian Bach continued to resonate in his 21st Symphony, K. 134.

Perhaps, J.C. Bach’s influence on the young Mozart was most clearly communicated in his music for piano and/or orchestra, and we will hear and examine some of these compositions in our next episode.