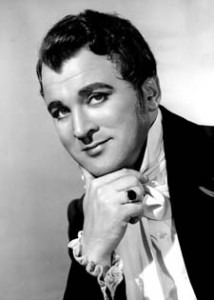 Last weekend, unconfirmed reports hit the internet about the great Swedish tenor’s death. By the following Monday the reports were denied by publicists and friends: Nicolai Gedda (born July 11, 1925) is alive and well.

Upon reflection, it dawned on me that regardless of the current pulse of the nearly 90 year old singer, Gedda remains one of the great immortal tenors, not least because of his enormous discography, estimated to exceed 200 recordings.

For me personally, Gedda was the tenor. He was the first star-tenor I witnessed. It was sometime in the nineteen-seventies, when the mature yet energetic performer visited the small municipal theatre of my hometown in Switzerland, and delivered a mind-blowing performance in Johann Strauss’ rather forgettable operetta Eine Nacht in Venedig (A Night in Venice). His crystal-clear, clarion tenor with the bombastic top notes, however, remained unforgettable.

Johann Strauss: A Night in Venice (excerpts)
Throughout his easy three octaves, his voice had an astounding consistency and silken beauty, always impeccably supported, confidently delivered, and with a timbre that can only be described as ‘smiling’. This was a voice that sounded like it was all so easy.

Certainly, he was prodigiously talented, but he was also hardworking and lucky. As a young and inexperienced singer he had the good fortune to audition for Walter Legge, the legendary EMI record producer and husband of German ueber-soprano Elisabeth Schwarzkopf. Legge immediately recognized the unusual ability of the tenor of Swedish-Russian parentage, and cast him in what would become the legendary Boris Godunov (Modest Mussorgsky) recording of 1952, with Bulgarian bass Boris Christoff in the title role. 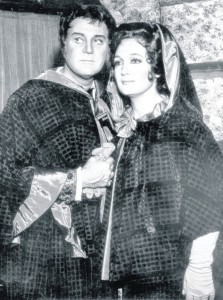 This was just the beginning of an astounding and versatile discography, which forever captured Gedda’s voice with singers including Victoria de los Angeles, Maria Callas, Grace Bumbry, Hermann Prey, Dietrich Fischer-Dieskau, as well as Elizabeth Schwarzkopf in nearly countless recordings which many considered the ideal vocal pairing. His recordings ranged from the serious Russian repertoire, to favourite Rossini, Strauss (Richard and Johann) and Puccini all the way to rarities such as François-Adrien Boieldieu. He recorded from French grand operas to German Lieder to Russian and Swedish folk songs.

Adolphe-Charles Adam: Postillon de Longjumeau : Mes amis écoutez l’histoire
His stage career was also unprecedented. From his beginnings at the Royal Opera of Stockholm where he quickly assumed challenging lead roles, such as in Adolphe-Charles Adam’s Postillon de Longjumeau (which includes the aria “Mes amis écoutez l’histoire” featuring a harrowingly difficult High D), he was soon discovered by conductor Herbert von Karajan who paved his quick road to Milan’s La Scala, where he debuted as Don Ottavio (Mozart’s Don Giovanni) in 1953, followed by all the great stages of Europe: Salzburg, Covent Garden, Paris. He then swiftly conquered the Metropolitan Opera of New York, where he sang for 22 seasons in 27 roles, reputedly reaching the grand total of 289 performances. At the Met, he created the role of Anatol in the 1958 world premiere of Samuel Barber’s opera Vanessa, pairing him with Eleonor Steber and Regina Resnik.

Benefitting from his fluency in six languages, his impeccable diction, and his flawless legato, the range of his repertory seemed boundless. Yet he chose his roles carefully, rarely straying from the parts that suited his uniquely lyrical tenor. His impeccable technique and intelligent role management ensured his career lasted well into his late seventies.

Indeed, his career was so varied and wide, it is no surprise that one of his many fans managed to post the perfect clip on YouTube in response to the erroneous death notice: So leb’ ich noch (So, I am still alive) from Der Barbier von Bagdad by Peter Cornelius.