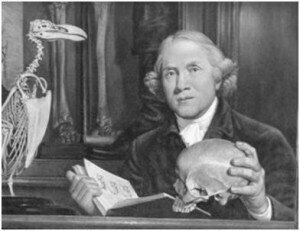 When Joseph Haydn arrived in England in January 1791, he found lodgings with the impresario Salomon in Great Pulteney Street, opposite the pianoforte shop of John Broadwood. At that time, Haydn was the most famous composer in Europe, and London society eagerly embraced the musical celebrity. The Lady’s Magazine reports in January 1791, “Haydn, the celebrated composer, though he has not yet been introduced at our court, was recognized by all the royal family, and paid them his silent respects. The Prince of Wales first observed him, and upon bowing to him, the eyes of all the company were upon Mr. Haydn, everyone paying him respect.” From his lodgings, it was only a short walk to the house of the famous surgeon, Dr. John Hunter, who lived in Leicester Square. 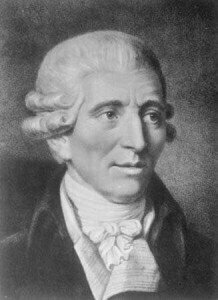 Hunter was one of the most distinguished scientists and surgeons of his day, specializing in anatomy. Initially working as an Army surgeon, he eventually set up his own school of anatomy in London. Over time, he amassed an enormous collection of anatomical specimens numbering nearly 14,000 samples that demonstrated the anatomy of humans and other vertebrates. Always curious and inquisitive, Haydn would certainly have been fascinated by Dr. Hunter’s anatomical collection. However, the primary reason for going to the Hunter household on a weekly basis had nothing to do with bones and sinew. Instead, Haydn was much more interested in the weekly salon held by Hunter’s wife Anne. 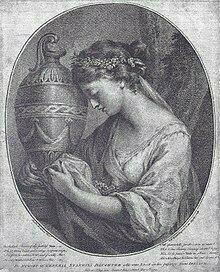 Anne Home as The Pensive Muse, before her marriage to John Hunter. Engraving by W. W. Ryland, after a lost portrait by Angelica Kauffman, 1767.

Anne Hunter (née Home) was a highly talented and cultivated woman with exceptional literary gifts. She gained some early notoriety with her poem “Flower of the Forest,” which appeared in an Edinburgh periodical in 1765. In addition, she became a rather successful songwriter in the second half of the 18th century. She wrote words for existing tunes, but also set verses written by others to music. Her lyrics, songs, airs and canzonets circulated anonymously for well over 20 years before she established herself as an authoritative poet in her 1802 collection. Her lyrics are rooted in the popular culture of the song, and the magazine British Critic suggested, “Her poems show no depth of thought, but have a natural feeling and simplicity of expression, which make many of them worth reading.” Conservative literary criticism aside, without Anne Hunter’s influence and poetic inspiration, it is highly unlikely Haydn would have tried his hand at composing English songs. 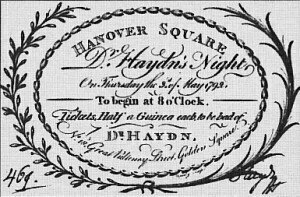 Collaborating and inspired by Anne Hunter, Haydn published the first of his two sets of “English Canzonettas” in June 1794. The texts were published anonymously, but are in fact authored by Anne. Conceived as keyboard works with vocal accompaniment, the piano writing takes full advantage of the larger key span and the expressive qualities offered by the improved piano mechanisms of the new Broadwood instruments. The Haydn scholar H. C. Robbins Landon writes, “it seems clear that Haydn’s intention was to compose technically easy songs which could be sung at sight by any educated music lover, and played at the piano prima vista by the average lady of musical inclination.” We know that Haydn had a special empathy for the tastes of late 18th century English drawing room music, and the Canzonettas and various sonatas, trios and other songs beautifully address these domestic sentiments.

The second set is dedicated to Lady Charlotte Bertie, Countess of Abingdon, the wife of Lord Abingdon, a politician, composer, arts patron, and one of Haydn’s many admirers. This set includes texts by various authors, including Anne Hunter, Shakespeare, and Metastasio. Haydn’s English Canzonettas were hugely successful, and they found inclusion in the repertoires of many famous singers. Jenny Lind, for example, included the “Pastoral Song” as one of her favorite recital pieces. In addition, as some of Haydn’s most enduringly popular small-scale vocal compositions, they also had an immediate influence on other composers. The musicologist Howard Mayer Brown wrote, “Haydn’s Canzonettas set a new standard for the genre in London, and even Beethoven in Vienna could not resist their influence during his struggle to find an individual style.” The exact nature of Haydn’s personal relationship with Anne Hunter remains ambiguous, but he did set her popular poetic fantasy “O Tuneful voice” for his departure from England.