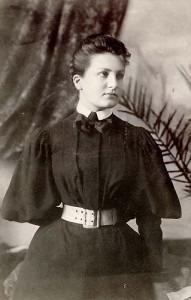 I’m still a little bit scared of Alma Mahler. I can feel her gigantic personality looming over me, transcending the years, inevitably offering some acid-tongued rebuke at my futile attempts to capture this complex and volatile person in writing.

When I think of Alma, I think of her as the way many do – a femme fatale, an avid socialite, salaciously bounding through life. But she was also a composer. Was this secondary to her social life? At first glimpse, probably, yes. What’s interesting is the way her compositional work is viewed always in relation to something else, most notably her voluptuous personal life. Of course, music is always created in a social context, but seldom is it this closely linked to a personality, to a myth, as it is with Alma.

Alma’s identity – her persona – is always viewed in how she related to other people. The large majority of writing on her life concerns itself with her altercations with composer X or artist Y, and it is within this legend that her music rests. Indeed, the only reason (apparently) that her songs are published are because of Gustav Mahler finally relinquishing the embargo on Alma’s creative output, at the advice of Sigmund Freud. How much more sensational can you get? I can see it now – none other than the founding father of psychoanalysis offering help to an overwrought composer in order to alleviate the problems he and his wife were facing.

People have always loved a good story, a good myth. Think of the legendary status of The Rite of Spring, its opening night riot going down in the history books, feeding the piece’s reputation – even though, by today’s standards, it is a relatively tame work. What do you think of when you hear the name John Cage? The majority of us recall his infamous 4’33”, redefining how we perceive Western concert tradition. Sergei Diaghilev, the famous impresario, considered shows a flop unless a scandal was evinced. (Finding Debussy’s ballet Jeux too dull, he added a plane crash at the end, after 18 minutes of tennis. As you do.)

The point is that if there’s a myth or legend surrounding a piece, allowing us to define it through relation to that myth or legend, then boy do we get defining. People latch onto scandals. Why? Because it’s interesting. Marcel Duchamp and his ‘Fountain’; Cage’s sound of silence; Stravinsky’s fistfight-inducing ballet. All of these works of art are couched in a comfortable – and clearly defined – social context.

So where does this leave us with Alma? Was she a stifled composer, or an acerbic socialite who wrote music in her spare time? Of course, the real answer is that it could be either, or neither, or both. The stifling and subsequent rekindling of her compositional practice could just be yet another headline in her turbulent life story. The beauty – and frustration – comes from the variety of interpretations available. Personalities are even more fleeting than scores; a score is (supposedly) solely the composer’s work, existing unchanged as a snapshot of history, of emotion, of society. Perceptions of personalities (especially ones such as Alma’s) are as flowing and fluid as the ink used to pen the letters from which we draw our opinions. Looking at the person behind the music opens our eyes to the world in which the music was written – and offers a beautiful, ever-changing perspective, allowing us to create a context in which we place the music. Perhaps it takes a personality like Alma’s to show us how inextricable and complex the relationship between life and music is, the existence of one symbiotically defining the other.