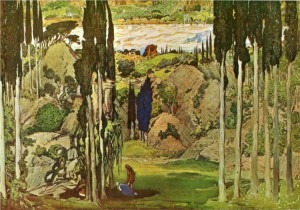 Bakst’s designs for Scenes I and III

Once upon a time, a ballet dancer had a dream of doing a ballet on a classical Greek theme. At the time, he was just a dancer in the Imperial Russian Ballet and it wasn’t until he became the choreographer for Diagilev’s Ballets Russes that Michel Fokine could realize this dream.

He fleshed out his idea and took it to Diaghilev and got the go-ahead. Ravel wrote the music and that’s where the first problems started. He didn’t agree with Fokine’s long-cherished vision and had suggestions of his own to make. Finally, they agreed on the scenario and Ravel set off on his work on Daphnis and Chloé.

The story of the goatherd Daphnis and his love for the shepherdess Chloé comes from a story from the Greek writer Longus from the 2nd century. The scenario has a classical setting of a sacred wood, with a grotto guarded by three stone nymphs, and a statue to the god Pan in the background. The shepherdesses dance; the goatherds dance. A rival cowherd, Dorcon, loses a dance contest with Daphnis. Jealousy ensues and Dorcon is vanquished. Pas de deux with Daphnis and Chloé. Rival shepherdess, Lyceion, tries to seduce Daphnis with her langorous “oops, my veil slipped off” dance. Enter brigands and general mayhem. Daphnis fears for Chloé when he can only find her sandal. An unnatural light floods the stage and the three nymphs guarding the grotto come to life to help Daphnis appeal to Pan for help. 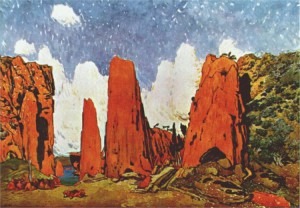 The second scene is set in the brigands’ (or pirates’) camp. Chloé does a dance of supplication and attempts to flee but is recaptured and is carried off by the leader. Suddenly Pan intervenes, casting mysterious lights, satyrs appear and the earth opens as everyone flees in horror.

The final scene is back in the original setting of the sacred wood – and Daphnis awakes to realize that everything was just a prophetic vision. 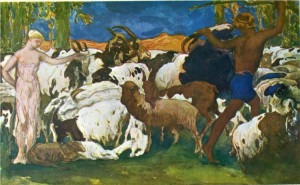 The sets were by Léon Bakst, the music by Ravel, the lead dancers were Vaslav Nijinsky and Tamara Karsavina with the Ballets Russes. It received its première on 8 June 1912 in Paris. Sounds perfect. But, there are always ego problems. Fokine and Ravel had their difficulties with the story line; Fokine had fights with Diaghliev, jealous of his relationship with Nijinsky; Nijinsky wasn’t in a good mood because of the problems with salaciousness in his solo ballet to Debussy’s Prélude à l’aprés d’un faune, which had been given its première only a week earlier. In the end, Ravel’s creation of Fokine’s dream only received 2 performances and then the season ended. It was the end of Fokine’s work with Diagilev and it was the only time that Nijinsky danced Daphnis.

The music, however, is regarded as some of Ravel’s finest work – it is full of his lush impressionistic harmonies and is often described as Ravel’s masterpiece for orchestra. He created two different suites based on the music and the work is now more often hear in concert performance than as a ballet.