“This album […] is a true delight and has much to savour.” 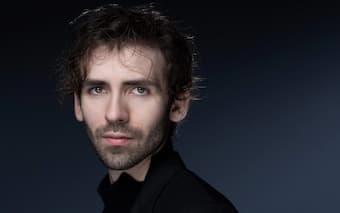 Having recorded the last three piano concertos by Saint-Saëns with great acclaim, Alexandre Kantorow, the winner of the Tchaikovsky Competition in 2019, went on to record not only the first two piano concertos by Saint-Saëns but also all his other works for piano and orchestra, with Tapiola Sinfonietta under the baton of his father, Jean-Jacques Kantorow. This album, I have to say, is a true delight and has much to savour. 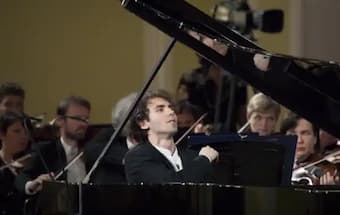 Alexandre Kantorow at the Tchaikovsky Competition in 2019 © Pianist Magazine

The album started with Saint-Saëns’ most well-known piano concerto – Piano Concerto No. 2 in G minor. The opening cadenza was not reduced into a technical showcase devoid of depth (as in many cases), but instead rendered a powerfully dramatic proclamation, while preserving the fantasy-like quality. At times reminding one of Bach’s toccatas for the organ, the cadenza had such a colossal sound and breadth in terms of both the aural and emotional landscapes. The first movement had the raw energy seldom found in studio recordings that kept listeners on the edge of their seats (e.g. the eruption of octaves at 6:26).


The wit in the second movement, Allegro scherzando, was nicely captured, together with some scintillating runs, a coruscating kaleidoscope of colours and effervescence. The final movement was tackled with astounding virtuosity and a relentless sense of propulsion and urgency. Kantorow’s audacity was commendable – he wasn’t afraid of taking risks and often brought the music to its limits of expression. 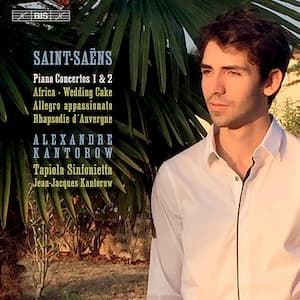 The unjustly underrated Piano Concerto No. 1 in D major received an equally exquisite reading. Despite not being the most original composition by Saint-Saëns, the concerto had no lack of memorable moments in the hands of Alexandre Kantorow. The first movement was played with finesse and lyricism, whereas the tender, introspective second movement began in a Bachian style and gradually morphed into an impressionistic painting, coupled with the atmosphere finely set by the orchestral accompaniment. In stark contrast with the preceding movement, the finale enjoyed much bravura and radiance from Kantorow’s playing.


Apart from the two concertos, Kantorow also included the lesser-known concertante works for piano and orchestra by Saint-Saëns, including Wedding Cake, Allegro appassionato in C-Sharp Minor, Rhapsodie d’Auvergne and Africa. Of particular note was his Wedding Cake for piano and strings, Op.76 – there was so much joy, and its zest was infectious! Who says good music must be serious? Marked by its playful character, Wedding Cake was written as a tribute to Caroline Montigny-Rémaury, a pupil of Liszt, for her second marriage.


Influenced by orientalism, Africa was completed in Cairo in 1891 following a cruise on the Nile River and was inspired by North African thematic materials, including Tunisia’s national anthem of that time. Noted for its technical demands, the work was effortlessly executed by Kantorow, full of verve and oriental flavours.


Kantorow’s pianistic facility is surely astonishing, but what enables him to make his mark on the international stage is the personality that comes through his music making. There were ample personal touches throughout the disc, but these only added conviction to his interpretation. Whether you are looking for a refreshing take on Saint-Saëns’ piano concertos or are interested in discovering his rarities, this is the album to have.

This album is available on BIS Records.