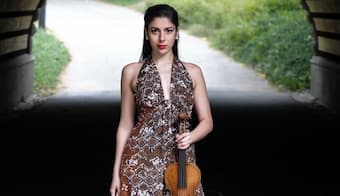 Hailing from New Jersey, violinist Alana Youssefian is equally at home with the baroque violin as with the modern – her performance of Vivaldi’s Spring has passed 1,000,000 views on YouTube. In 2018 she was named an American Fellow of The English Concert and a Juilliard Fellow of Mercury, and named Best Recital Soloist of the 2019-2020 season by the San Francisco Classical Voice Audience Choice Awards. I talk to her from her home on the east coast of the USA about her early life with the violin, and how she got into the baroque playing for which she is now so well-known.

What inspired you to start learning the violin?

I started officially when I was about four, but my brother is two years older so he got to start lessons before me. I got that time to think which instrument I wanted to play, and originally of course I didn’t want to do the same thing my brother did, so I wanted to play the cello. My mom asked me (because she’s a mom and knows better), ‘Will you carry it?’ And I said, ‘No’. So I got a violin.

Was there a moment that inspired you to be a professional?

Luckily I grew up in a very musical family so it was very natural, even though it took me basically up until university to decide it was what I wanted to do. I definitely wanted to quit more times than I can count, and my mom [a pianist] always told me ‘Stick with it, you’re always getting better’.

I kept with it, and it was always something that I absolutely loved. It was, as I got older, just a part of who I am, and still is. To be honest, though, I didn’t put in the work that I could have and should have. 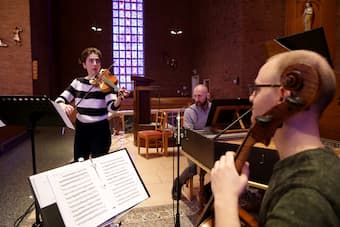 Alana Youssefian warms up with Michael Sponseller and Matt Zucker before a recording session at St. Rose of Lima Church in Haddon Heights.
© The Philadelphia Inquirer

I skated by on a lot of instinct and just learning what I could in my lessons and in orchestra, learning from my friends and colleagues. On my own, I hated to practise so I really didn’t most of the time unless I had a concert coming up and totally didn’t want to embarrass myself. When it came down to taking that next step and thinking about what I wanted to pursue in college, I think part of me always knew that I would do something music related. I didn’t know that it would necessarily be performance, but the more I thought about other paths I could take, they just seemed a lot emptier.

I don’t know if [emptier] is the right word, but they didn’t seem quite as fulfilling to me as something with music, and then I thought about it: am I ready to really hunker down, put in the hours of practice and just let everything else fall away and get into it?

I grew up with musician friends in major orchestras around the country and they were the first to tell me, ‘It’s really hard, it’s going to take a lot of work, you’re going to face sacrifices in your personal life, you’re going to face a lot of rejection and all of the intensity that comes with being a musician,’ so I wanted to make sure I was ready – and it was definitely the right decision for me.

I don’t think I can just target one specific person, but what I’ve realised about myself […] is that I get inspired by working with other people. When I’m working with a group or even just working with one other person in a duo I immediately get inspired by what they’re doing. […] It sounds so new age-y but there’s an exchange of energy that, for me at least, brings my playing to the next level, in a way that most of the time I don’t feel when I’m on my own. There’s something about being in a group and realising how talented the people around you are.

Is there are a particular piece or composer you feel most comfortable playing?

I do love Vivaldi. There’s a lot more variety than people think, and the slow movements are so fun to play and absolutely gorgeous. Even though I specialise in the baroque repertoire, and there’s so much to be explored and enjoyed there, I love Beethoven and Mendelssohn. I got the chance to play both of their concerti on gut strings which was really wonderful. I wish I had more interesting answers but I just love their music so much!

As I’ve gotten more into exploring the historical side of these pieces there’s a whole other world. I’m always learning and always discovering so it makes the music even more interesting. [With] stuff that I grew up listening to and have always loved, it just makes that love even deeper.

Did you always do Baroque alongside modern violin? 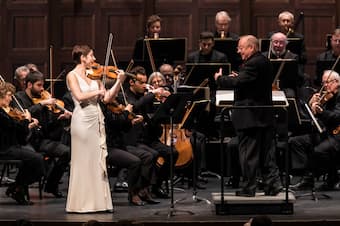 I grew up listening to more ‘classical’ standards. I very much did modern playing growing up, just because I didn’t have any access to the baroque world. I got into baroque when I was at Oberlin Conservatory for my undergrad studies. My private teacher there, Marilyn McDonald, did both; I didn’t really have an interest in it. I had played in a really wonderful youth orchestra growing up so I thought I wanted to pursue that, but decided to register for her class because she was my teacher. I also thought it might help me connect with Bach a little better because I had always struggled with that. I mean, I still struggle with it, let’s be real, who doesn’t.

For the first semester I actually really didn’t like it. I had such a tight setup with my instrument. I couldn’t hold the baroque violin, I didn’t understand the right hand technique, that connection you need with the gut strings because they’re so different from steel strings – I sounded really bad for quite a while. But it wasn’t until I started doing baroque ensemble, the small orchestra we had, that I had this ‘wow’ moment. We were playing this Corelli Concerto Grosso, and I was looking around, and everybody was looking up from their music and connecting and smiling. The music itself was beautiful but also the experience of playing the piece was beautiful.

I guess it awakened something inside me, and it did take a while to really be able to connect with the instrument. At the base level it’s just a violin but there are those little differences, the subtle nuances of playing a different instrument. I focused primarily on modern but always kept the baroque more on the sidelines, to learn a little bit more every day and to simply enjoy playing with other people in a way that was different from a huge symphony orchestra.

I think it wasn’t until I did the Juilliard programme that I could really dedicate the time and zero in on that performance practice and the academic materials, and have the time to scour the library for new pieces that I hadn’t heard of.

Is there anything you haven’t played yet that you want to in the future?

What immediately comes to mind is getting to do Brahms on gut strings. The concerto, the sonatas, anything über romantic on gut strings. I love it so much but I haven’t had the opportunity to do it out in public yet.

Sometimes I was made to feel like my instincts were incorrect. I would want to play something a particular way, and in conservatory it’s ‘this is how you play this piece, this is how you play Mozart’, and for one thing it wasn’t how I conceptualised it, and a lot of that performance practice I couldn’t do. It felt weird to me, so I think that’s why the more I got comfortable with the technical part of [baroque playing] the more it drew me into this world of being able to explore the same repertoire but having the freedom to put your own spin on it.

If you have the information to back it up, you can do it. It’s not just ‘this is how it’s done’. It’s a lot more involved. And if you can’t do your own art your own way it doesn’t seem worth it.

Do you take inspiration from other things in life apart from music?

Oh yes. The notes are one thing, but I like to get inspired by all the art forms, especially visual art and dance, especially for the baroque repertoire. […] I like to take all those different elements of storytelling, whether I want people to be able to picture an image or [hear] words. It helps deepen the music, at least for me, and a lot of the time it helps it make more sense. […] And putting it into context: so much of the classical music that people think is so stuffy and boring was the popular music of the time, so I guess I try to bring that. People weren’t always sitting and being quiet and falling asleep. They were wild for this stuff.

Is there any piece or composer to whom your relationship has changed over time?

For me, the Beethoven concerto is a great example. I studied that piece in conservatory and was terrified of it for the longest time. I would think about it and my hand would start shaking. But it’s a piece that I kept taking out every now and then. Something that another one of my amazing teachers taught me is to sometimes take out a piece that you’ve played, give it another run, and see if you find something new, and so I continually did that with the piece.

It got less and less scary the more I took it out, and so by the time I finally got a chance to perform it – I think I had a week’s notice to play it professionally in front of people – it wasn’t this terrifying bear of a piece, it was just a beautiful piece of music that I couldn’t wait to perform for people.