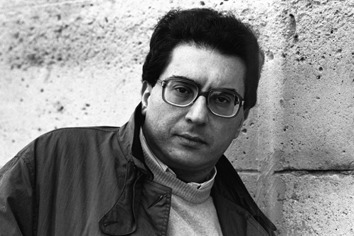 Following the release of his new CD, featuring concerti for horn, violin, and clarinet, I spend lunch getting to know Franco-Lebanese composer and poet Bechara El-Khoury. Born in Lebanon before moving to France and eventually becoming a French national, his music displays a keen awareness of sonic possibilities, conjuring up kaleidoscopic and mellifluous orchestral textures.

Composition fascinated El-Khoury from an early age, which is perhaps why he can draw on his childhood for inspiration – since it was so full of music already.

‘I began to compose melodies and simple songs when I was around 7 years old. I quickly moved to writing for orchestra, when I was about 12. I composed many pieces when I was young, but my first ‘official’ work (that appears in my catalogue) was not until 1979, when I arrived in Paris.’

Asking if he ever thought his earlier works may be released, he says dryly, ‘Perhaps after my death!’, and then promptly bursts into laughter.

Before he moved to Europe, El-Khoury was the Kappelmeister in the church of Saint Elias in Antelias near Beirut from 1973-76, and whilst holding the post wrote many pieces for the large choir there.

Given his strong involvement with the choir during his Kappelmeister years, vocal music makes up a surprisingly small part of El-Khoury’s oeuvre: as it stands, his catalogue details over 100 compositions, including more than 40 pieces for orchestra, and only five for choir. This is, however, about to change. ‘This year, I’ve written a few pieces with voices, actually: a piece for soprano and orchestra with Alphonse de Lamartine’s poetry; a vocalise for soprano and orchestra; and an a cappella [unaccompanied] piece for three choirs.
‘I’m also in the process of writing an opera. I’ve finished the libretto, and just need to tweak it before I start composing. I imagine it’s going to be about 90 minutes long, in one act. I haven’t begun the music yet since I still have some other things I have to finish first!’

El-Khoury is also an active poet, with his music and poetry existing often symbiotically.

‘With many of my pieces I write a poem linked to it, either before or after. Sometimes the music creates a poem, and sometimes it is created by a poem.

‘My poetic inspiration comes largely from the famous Lebanese poet Khalil Gibran, and from Nietzsche.’

El-Khoury has written seven Symphonic Poems for orchestra. Knowing how his music and poetry are often created in tandem leads me to ask him how much of his poetry – the subject matter – is actually in his music.

‘Not necessarily all my music is linked to poetry,’ he explains. ‘And even if a piece has some poetic or programmatic inspiration, it’s still music. You can listen to it without having to know the content. Perhaps only four pieces of mine require knowledge of the subject matter: my Triptych for the Lebanese civil war : Symphonic Poem No.1 (‘Lebanon in Flames’), Symphony (‘The Ruins of Beirut’), and the Requiem for Orchestra, and New York Tears and Hope dedicated to the victims of 9/11.

‘I take a lot of my inspiration from nature. My horn concerto is called The Dark Mountain, for example. This dates back to my childhood, when I was a little boy in the mountains in Lebanon, and also when I moved to Europe.’

I ask if the way he works has changed much over the years, especially since moving to Paris. ‘About 15 years ago, I started reflecting on my own work a lot more. Now, I’ll write and rewrite a piece between four and seven times before orchestrating it.

‘When I write before I make the orchestration, I normally write on two, three, or four systems, and have all the instruments in my head already – it’s just a case of writing it all out.

‘It’s easy for me and difficult for the musicians!’ he laughs. ‘The french horn is my favourite instrument – they always get the hardest parts. The players are always scared when they see my face in a rehearsal!’

This fear, if true, does not of course come across in the numerous recordings made of his works by the Orchestre National de Paris, London Symphony Orchestra, NDR Symphony Orchestra, among many others. El-Khoury’s music has a highly individual harmonic palette, complimented by a vivid and nuanced style of orchestration.

‘I’m hugely inspired by Richard Strauss’ orchestration,’ he muses. ‘Strauss and Brahms. I don’t like avant-garde music. I can appreciate it, but not love it. I also love good film music. There are some amazing film composers out there. Korngold was one of the best. I’ve listened to his Violin Concerto hundreds of times. He was a great orchestrator.

El-Khoury thinks for a moment as our interview draws to a close. ‘I love Dutilleux, Zemlinsky, and Einojuhani Rautavaara. With that said, I’m not that strict in my opinions! The best attitude is to be open to all kinds of music. I’m not complicated,’ he chuckles.