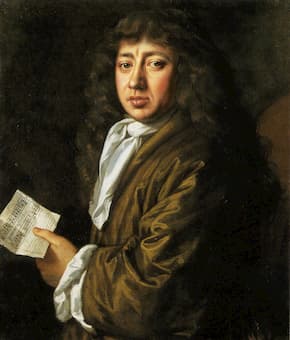 Samuel Pepys, FRS (1633-1703), is best known to us through his 10-year private diary, kept between 1 January 1660, when he was just ending his 26th year, and 31 May 1669. He lived for another 34 years but complains at the end of the diary that writing it up has been too hard on his eyes and he’s stopping. He says that, going forward, he will dictate his diary to “my people,” but doesn’t seem to have done this.

Music plays a surprisingly large role in Pepys life. In looking at the first years of his diary, we hear of him playing the recorder, both alone and with friends; singing, and arranging to have his wife take singing lessons as well (1 Oct 1661); getting up in the morning to practice his singing (28 June 1661), listening to his friends play the viol, the harpsichord, and other instruments. He was also, in his diary, a critic, complaining about poor performances: “So to White Hall; where I staid to hear the trumpets and kettle-drums, and then the other drums, which are much cried up, though I think it dull, vulgar musique….” (3 Feb 1661) and adjudicating in an argument between proponents of French or English music.

In June 1661, he sees a woman conducting at the Globe Theatre: “There we went and eat and drank and heard musique at the Globe, and saw the simple motion that is there of a woman with a rod in her hand keeping time to the musique while it plays…”

Later in the diary he praises composers of music that he likes: “…they spent the whole evening in singing the best piece of musique counted of all hands in the world, made by Seignor Carissimi, the famous master in Rome.”

Giacomo Carissimi (1605-1674) of Rome was one of the most celebrated composers of the early Baroque, noted for his sacred music works: oratorios, cantatas, and motets and masses. 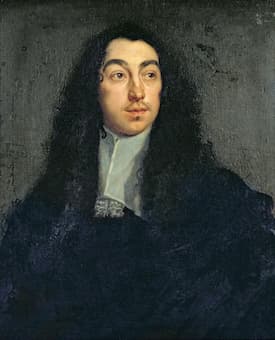 Another time, he plays music by Matthew Locke and Pepys wife learns the flageolet so that she and her husband can play duets: “I tried some things of Mr. Locke’s for two flageolets, to my great content, and this day my wife begins again to learn of him; for I have a great mind for her to be able to play a part with me.” (13 August 1663). And another time, he hangs out in a coffee house with “Mr. Locke and Pursell, Masters of Music…” (21 Feb 1660), and then plays music “Here we had variety of brave Italian and Spanish songs, and a canon for eight voices, which Mr. Locke had lately made on these words: “Domine salvum fac Regem,” an admirable thing.”

Matthew Locke (c. 1621-1677) was a composer for King Charles II and he was succeeded as Composer for the Violins by his friend Henry Purcell (1659-1695). The “Pursell” Pepys is speaking of is Henry Purcell’s father, Henry Purcell, Sr. (? – 1664), a gentleman of the Chapel Royal and who sang at the coronation of Charles II. In 1661 he was Master of the Choristers at Westminster Abbey.


He also plays the lyra viol (17 November 1660): “So home and wrote letters by the post. Then to my lyra viall, and to bed.” And he notes he also played the violin and the lute: “So home to dinner, and so to the office all the afternoon, and at night to my viallin (the first time that I have played on it since I came to this house) in my dining room, and afterwards to my lute there, and I took much pleasure to have the neighbours come forth into the yard to hear me.” (21 November 1661) 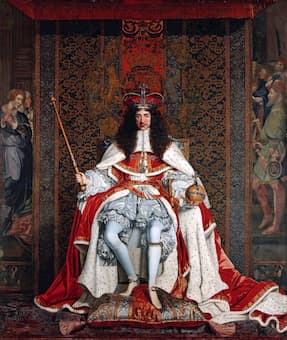 He doesn’t spare himself from his criticism: “Here we had, for my sake, two fiddles, the one a base viall, on which he that played, played well some lyra lessons, but both together made the worst musique that ever I heard. We had a fine collacion, but I took little pleasure in that, for the illness of the musique…” (10 April 1661)

He comments on the changing musical practice of the day: “Thence to White Hall chapel, where sermon almost done, and I heard Captain Cooke’s new musique. This the first day of having vialls and other instruments to play a symphony between every verse of the anthem; but the musique more full than it was the last Sunday, and very fine it is.” (14 September 1662).

This change in performance practice was at the behest of King Charles II, who was changing English practice to that of Versailles. He created an ensemble of 24 violins, as Evelyn noted, modeled on Les Vingt-quatre Violons du Roi at Versailles. These were not 24 violins as we would know them today, but an ensemble of 5 different-sized string instruments: violin, alto viola, tenor viola, low-tenor viola, and cello. The French ensemble lasted from 1626 to 1761. 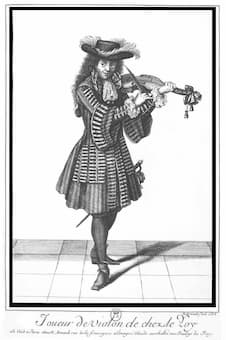 Nicolas Arnoult, one of the 24 violinists
of the French king (1688)

We also get some nice examples of music at home: “After dinner all the afternoon fiddling upon my viallin (which I have not done many a day) while Ashwell danced above in my upper best chamber…”. (24 April 1663) and later “So to my office and by and by home, where my wife and her master were dancing, and so I staid in my chamber till they had done, and sat down myself to try a little upon the Lyra viall, my hand being almost out, but easily brought to again.” (27 April 1663). He also has bespoke details made for the instrument he’d ordered: “Up and to read a little, and by and by the carver coming, I directed him how to make me a neat head for my viall that is making.” (5 June 1663)

On another evening, “After dinner by Mr. Gauden’s motion we got Mrs. Gauden and her sister to sing to a viall, on which Mr. Gauden’s eldest son (a pretty man, but a simple one methinks) played but very poorly, and the musique bad, but yet I commended it. I took the viall and played some things from one of their books, Lyra lessons, which they seemed to like well.” (25 June 1663).


Beyond his diary, Pepys’ legacy was a reform of the English Admiralty and his service as the sixth President of the Royal Society. As you read his diary, it seems that there’s little that doesn’t catch his attention. He goes to plays and operas and comments on the science, arts and society of his day. He sees the return of Charles II (1661) and suffers through the Plague (1665) and the Great Fire of London (1666). When he set his pen down, we lost an amazingly personal view on late 17th-century England.