Artists Interviews
Writer and Pianist, or is that Pianist and Writer – an interview with Jeremy Denk
by Maureen Buja May 3rd, 2018 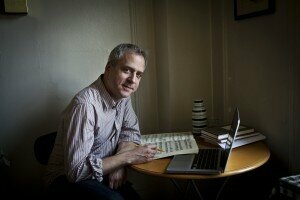 Jeremy Denk made one name as a thoughtful and imaginative pianist. He made another name in 2013 when he wrote a piece for The New Yorker on learning to be pianist and his relationship with his most influential teacher, György Sebők. He describes the difficult world of learning music and piano and that place where you must leave your mentor and create your own world. Nearly everyone comes to that place, it may be with your parents, it may be with your teacher or a different mentor: at some time, you have to become your own best you, rather than just like someone else.

Mr. Denk’s upcoming concert in Hong Kong travels from Mozart to Prokofiev, or from three pieces about dreaming, loss, and the movement of time, to two pieces that are cross related in three different ways.

He will open the program with Mozart’s Rondo in A minor, K. 511, where Mozart has started to transcend the classical period, almost seeming for foreshadow Chopin in his ornamented theme. Falling sevenths and chromaticism underscore the minor theme bringing forth the ideas of loss.

Mozart: Rondo in A Minor, K. 511 (Charles Rosen, piano)
Prokofiev’s Visions fugitives, on the other hand, are fragmentary Schumann-like bits, laid into a dreamy world. For Mr. Denk, it was hearing Prokofiev’s own recording of this work that changed the way he thought about Prokofiev.

The first half of the recital closes with late Beethoven and his Piano Sonata No. 30, Op. 109. The late piano sonatas show Beethoven as someone no longer concerned so centrally with rhythm, but now concerned with the idea of musical time as a whole. After an improvisatory beginning in the first movement, the very quick second movement is nearly a return to the old rhythmic Beethoven. It is in the third movement, a theme and variations movement, that we start to see the life of the new late Beethoven – more interest in counterpoint and an intense drive towards variation.

Beethoven: Piano Sonata No. 30 in E Major, Op. 109: Andante molto cantabile ed espressivo (Jenő Jandó, piano)
The second half of the recital start with Liszt resetting Beethoven and Schumann, in turn, dedicating his work to Liszt, but firmly referencing Beethoven in it.

Beethoven’s song cycle An die ferne Geliebte (To the Distant Beloved), written in 1816, is credited as being the first song cycle ever written. As a song cycle, the works follow each other without a break and there are references to nature and the countryside. For Liszt, this is a most un-Lisztian transcription, as it remains fairly true to Beethoven’s original, with the addition of a few octave transpositions.

Liszt: Beethoven – An die ferne Geliebte, S469/R124, “Liederkreis”: VI. Andante con moto, cantabile – Andante espressivo – Allegro molto e con brio (Louis Lortie, piano)
The recital closes with Schumann’s Fantasy in C Major, Op. 17, written at a point when he was solely writing piano music. The impassioned first movement stands as a reference to Schumann’s thwarted love affair with Clara Wieck. He wrote to her later: “You can understand it only if you imagine …my feelings…when I resigned myself to losing you.” In true Romantic style, Schumann ends the first movement with a reference to Beethoven’s An die ferne Geliebte.

Schumann: Fantasy in C Major, Op. 17: I. Durchaus phantastisch und leidenschaftlich vorzutragen – Im Legendenton – Erstes tempo (Louis Lortie, piano)
To put together a recital like this takes a performer with a close understanding not only of the music but of music’s milieu. And, in that regard, we can look forward to his upcoming release of his recording where he takes on the entire history of music, from 1200 to yesterday. For Mr. Denk, this is not only a beautiful story of human civilization but also an unfolding poem about music.

Following his piece in The New Yorker, he has been working on a book, tentatively titled “Every Good Boy Does Fine,” for Random House. His getaway from New York is a place in the Catskills where he gets up early to practice and write, and then gets outside with extensive country walks. Cooking, reading, and his goats fill out the rest of his day.