Features
Women Composers You Should Know I
by Maureen Buja March 19th, 2022

They’re out there, hidden in the background, pushed out of the way by not only male composers but also male programmers, male conductors, male artistic directors. You have to look deep to find them, but they’re there, all through history. 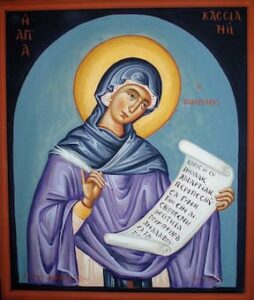 We can start in the remote past with Kassia (810-843/67), composer and poet in Constantinople, who is one of the first women composers in the western world known by name. As with many of the early women composers, she made her career in the church, starting her own monastery in 843 latterly serving as abbess. Her monastery lasted until the mid-20th century when it was destroyed by the Turkish government. Her song, Tin pentachordon Iyran (The Five-stringed Lute), was written to honor five saints for December 13: Eustratius, Auxentios, Eugenius, Orestes, and Mardarius. The poetry, by Kassia, brings together the 5-string lute with the 5-fold martyrs. Written in Greek, the poem is a virtual word-game where the etymology of each martyr’s name is followed with a phrase using the root of the martyr’s name. 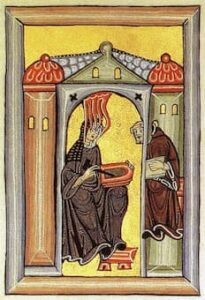 Hildegard of Bingen (1098-1179), the 12th century Benedictine abbess who is most people’s image of the earliest composer, was also an abbess. She started her career at the Benedictine monastery at the Disibodenberg, in the Palatinate Forest at age 8. When she was 52, she founded her own monastery at St. Rupertsberg and another in 1265 in Eibingen. She was known for her visions and is credited by many to be the founder of scientific natural history in Germany.

Or we can try other countries and other women composers, such as the 12th century nun Herrad von Landsberg, who lived in the Hohenburg Abbey outside Strasbourg. She is known for the Hortus Delicariarum, a collection of poems and religious texts illustrated with 636 miniature paintings. It was destroyed in the 1870 bombing of Strasbourg and little of it remains except for random copies of single images by other artists.

Maroie de Diergnau de Lille (fl. 13th century) was a trouvère in southern France. Only two songs remain of her output and one is just a single strophe. She also appears, as Dame Maroie, in a work by the composer Andrieu Contredit d’Arras, where he addresses the work to her.


With the exception of Maroie de Diergnau, each of these early composers were abbesses in monasteries. As much as the church repressed women, it was also one of the few places that their musical heritage could be preserved. Next stop, the 16th century!