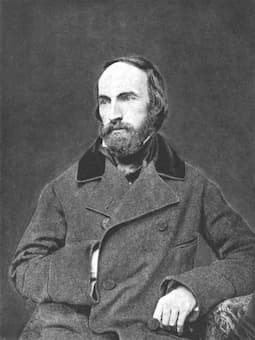 William Henry Fry (1813-1864) has rather fallen off our musical horizon, but he was the first native-born American to write for a symphony orchestra, and the first to write a grand opera. He was the first music critic (remember those?) to write for a major newspaper and was held the outspoken and then-radical opinion that Americans must support the music written in America.

Fry’s opera Leonora (1845) was the first by an American composer to be performed in the United States. His Santa Claus: Christmas Symphony was written in 1853. It is more of a symphonic poem than a symphony in the traditional sense and offers a unique mix of the sacred and secular.

The work opens with a trumpet announcing Christ’s birth, followed by the celestial host taking up the chorus. Then a Christmas Eve party starts with dancing and revelry. Then there’s a snowstorm. As the partygoers leave, everything quiets down and we have a contrast between a setting of ‘The Lord’s Prayer’ in the upper strings followed by ‘Rock-a-by baby’ played by the soprano sax. The soprano sax was an interesting choice as the instrument had only been invented a decade before in France by Adolphe Sax. 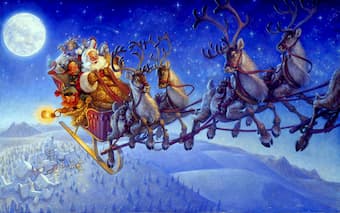 Santa and his Sleigh

The snowstorm renews in vigor (listen for those spiraling winds in the violins) and a traveler (solo double bass) moans and perishes in the storm (18:00-19:00).

Up on the rooftop, Santa Claus enters (snap of the whip!), slides down the chimney (flutes), and puts toys in the children’s stockings (pizzicato strings). As dawn approaches, a chorus of angels sing ‘Adeste fideles’ (violins) and the children waken to the sound of the horn and ‘Little Bo-Peep’ on the trumpets. At the end, the opening music reappears, along with ‘Adeste fideles’ and the whole work closes in a hymn of praise.


It’s a very mixed message for the 21st century and yet a very solid one for the mid-19th. The mix of the traditional Christmas story with a character that who for us has become a very commercialized Santa Claus has to be moved back to his traditional role of Saint Nicholas. 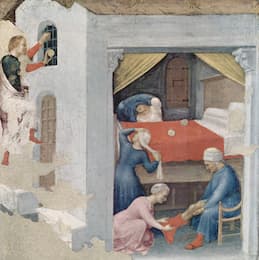 Saint Nicholas of Bari (270-343) became best known for his rescue of three sisters from prostitution by dropping a sack of gold coins through their window for three nights so their father could pay their dowry. Over time, Saint Nicholas and his secret gift-giving got mixed with Nordic folktales and so an early Christian bishop was transformed into Santa Claus.

Fry’s music was progressive for its day and was often disliked by critics, although audiences voiced their approval. Enter Fry’s vision of what could happen on a holiday – both the happy and the sad, the artistic and the natural.