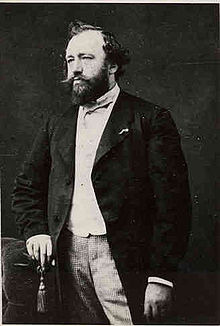 We don’t think of instruments as having been “invented” – they just have been there forever. In some cases, though, instruments do have a definite hand guiding them and none more so than the Saxophone.

The Belgian instrument maker Adolphe Sax (1814-1894) was the son of instrument designer Charles-Joseph Sax. Adolphe began to design instruments in his youth, specializing in the flute and the clarinet before going on to the Royal Conservatory in Brussels.

He moved to Paris in 1841 and began working on new instruments. In 1844, he worked on valved bugles, and his examples were so successful, that all valved bugles, whether made by Sax or not, were called Saxhorns. Because these were based on the bugle, the instrument has a conical bore, i.e., from the narrowest part at the mouthpiece to the widest part at the bell, the instrument gets gradually wider. During the American Civil War, an over-the-should variety was developed so that the band, which marched in front of the army, could pay for the men behind them. When you look at this picture of a band from 1865, you’ll see that when they put their instruments to their lips, the bells of the instruments will point backwards. 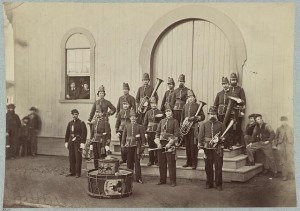 Once he was done playing with trumpet-like instruments, he went back to the clarinet and other then the Saxophone. His patent was taken out 28 June 1846 and was intended for use in both orchestras and concert bands. Unlike the clarinet, the saxophone is another conical bore instrument and in making it in metal, Sax intended it to be an instrument that fit between the woodwinds and the brass winds – it’s made of metal but is still played with a reed. He was aiming for an instrument that had the power of a brass wind but the agility of a woodwind.

The instrument he was seeking to replace was popular at the time, but now is no longer part of the common instrument families: the ophicleide. The Ophicleide is a conical-bore instrument made in metal, with keys like the woodwinds, but which is played using a metal mouthpiece, similar to that of a trumpet. It was extremely difficult to play, hard to keep on pitch, and with a rugged sound.

In his groundbreaking 1988 recording of Berlioz’ Symphony fantastique, Roger Norrington used the ophicleide to underscore the horror of the use of the ‘Dies Irae’ in the final movement of the work – listen at 03:28 where you hear a sound (after the un-tuned bells) that’s not a trombone or a euphonium or a tuba –but something wilder.

In concert bands, the saxophone has a ready place, as it also does in jazz bands. In the orchestra, however, the sax has a rare place in 19th century music, and mainly appeared in music by French composers. It’s used in one movement of Ravel’s orchestration of Mussorgsky’s Pictures at an Exhibition, in The Old Castle, where it is supposed to represent a troubadour singing – the element that Sax built into the instrument, the singing quality, comes through in this work. 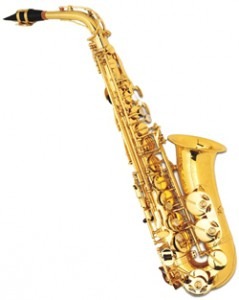 Unfortunately, that’s the only music for the saxophone during the entire work, so the player has to sit there, silent, for the rest of the concert.

In the 20th century, there has been more music on the orchestral stage for Saxophone, particularly as popular music has had more of an influence. Here’s a modern Japanese composer, Takashi Yoshimatsu, and his saxophone concerto entitled “Cyber-bird.” The jazz influences are clear in this 1993, but then again, so is the ability of the saxophonist to take flight as a bird on the wings of his instrument.

In displacing the ophicleide as an instrument of the French Army, the saxophone securely Adolphe Sax a nice contract and the money to match. He may have been driven into bankruptcy more than once because of the lawsuits of rival instrument makers, but it is still his instrument, with his name on it, that we still know, 200 years after his birth, 120 years after his death and 168 years after he was granted the patent, for which we remember Adolphe Sax.