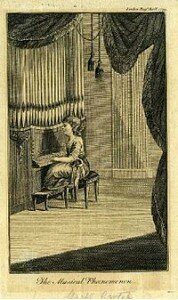 It might well be that William Crotch (1775-1847) was the most precocious musical talent of all times. Son of a humble carpenter, young William showed great enjoyment of music, and before his 2nd birthday was able to play a number of tunes on an organ constructed by his father. We do need to take such tales of musical genius with a grain of salt, but we also know that William gave daily recitals on the organ in the rooms of a milliner in Piccadilly when he was only three and a half years old. His ambitious mother had taken him to London, and William played at the Chapel Royal in St. James’s Palace, and also for King George III. There was even a report in the “London Magazine” in April 1779. “He appears to be fondest of solemn tunes and church music, particularly the 104th Psalm. As soon as he had finished a regular tune, or part of a tune, or played some little fancy notes of his own, he stops, and has some of the pranks of a wanton boy; some of the company then generally gives him a cake, an apple, or an orange, to induce him to play again.” 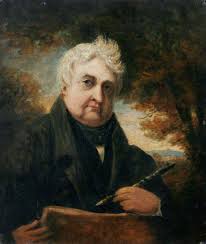 Young William was also supremely gifted as a visual artist. He produced a number of watercolors and pastels at an early age, and everybody wanted to meet the little genius. All that notoriety turned little William, according to contemporary reports, into a rather spoiled and ill-tempered child, and he had some psychological problems later in life. However, at age 15 he studied music at Christ Church, Oxford, where he also held the position as organist, and he may have composed the “Westminster Chimes” in 1793, which is played by Big Ben when it strikes the hour. At the turn of the century Crotch became a Professor of Music at Oxford University. A champion of Bach’s music, Crotch compiled one of the first analytical collections of music, which he published in three volumes between 1808 and 1811. He was described as being of “a retiring disposition with a tendency to extreme conservatism in his old age.” Crotch died in 1847, and his musical genius and his music were soon forgotten.