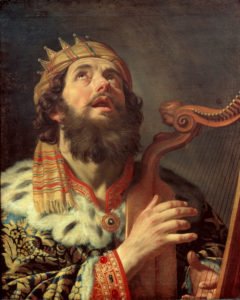 I have battled with the idea of what music is saying for most of my life. While I still have not drawn a final conclusion, I think I’m getting closer.

As much as I and others (like Plato) say that all music is abstract or absolute, there are strong connections between aspects of music and human emotions. When I say aspects of music, I’m not just talking about melody.

I recently came across the quirky, but ever so interesting character Michael Levy. He is a composer among other things and his fascination and passion is for the Lyre. Yes, that ancient Greek instrument the lyre which probably spawned the harp, or they arrived around the same time. Whatever the history, the sound of the Lyre triggered something in me.

The fact that the voice of an unprocessed, unadorned musical instrument from C. 2000 BCE can say something so moving now, I assume it also did in ancient times. Then maybe, music is not as abstract as we say it is.

Levy has researched and played some of the earliest music known to exist. In his The Oldest Known Melody c.1400 BC!, it’s clear that this is not only a complex but totally relatable piece of music, even if it is 3400 years old. It is a Hymn from the Hurrian people of Northern Mesopotamia.

Arthur Schopenhauer as a philosopher concentrated on the power of the will; he said it was inescapable. However, he thought that it was possible to escape our will, or as he put it “to emancipate ourselves” from the will for brief periods. One method of doing this was through listening to music. He thought the experience of music could transport us into a non-sensory realm.

This is what hit me when I was listening to Levy play his Lyre. While it’s impossible to state accurately what a person 3400 years ago was feeling when they heard this Hurrian Hymn, I imagine it would have produced similar feelings to what I, and perhaps you experienced when you heard it.

The music is contemplative, philosophical maybe. Overall, its introspective musing makes one feel at ease and calm. I know this music relates these emotions through my knowledge of the language of music. As the majority of people are confident they can pick the difference between happy and sad music, I suspect that most people will experience what I do. The connection that this music imparted to people long ago, still holds true today.

If that is right, music is saying something more profound and has a greater universal connection between humans than most have ever realised. What has been discovered in this Hurrian Hymn has built a bridge to the past through music. Therefore, the sounds we make today will create a link from us to future generations, if they get to hear our music that is.

Apart from all the ancient texts that have been discovered and deciphered throughout the world, which have expanded our current knowledge, ancient music might also extend our awareness of who we are.

One of the things Levy does well is he creates music that sounds ancient. His track, The Wisdom of Minerva, which he proudly states was played on the BBC, wonderfully captures the essence of what many people would think that ancient music sounds like. His music connects a listener with the past.

I believe Levy’s compositions echo of more than just the sound of the ancient world; they pair the sensibility of early life with human emotions today. On his album, King David’s Lyre; Echoes of Ancient Israel, this languorous melody grasps the imagination and transports it back to around 1000 BCE when King David was alive.

The simplicity of this music speaks loudly. Levy says that certain pieces he created are “based on reconstructions of some of the incredibly rare, actual surviving written music of antiquity”. This unpretentious music rings with a pattern that can linger in the mind longer due to its simplicity. Music of a simple construction can be the most profound and moving sound we can experience.

Commonplace things like looking at clouds, feeling the wind, seeing the sunset and rise, these things stay with us because they are uncomplicated and natural. They are things that we can share with and relate to other people on a similar level. Perhaps these early tunes that Levy creates and brings back to life, perhaps they too hold a universal experience. I feel a strong sense of connection to the past when I hear them.

Music just might be saying, this is what it feels like to be alive and to be a human being. If music thousands of years old can move us today, and tell us something about ourselves, music must be something more than abstract. Levy’s New Music for the Ancient Lyre, might tell us more about ourselves and our past if we let the history of music and its connections seep in.