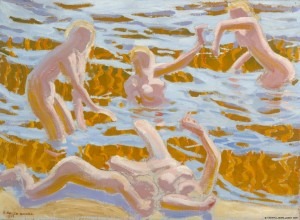 The Oceanids are the water spirits, children of Oceanus, the Titan whose river encircles the world, and Tethys, his sister/wife who oversaw the rivers of the world. Oceanus and Tethys had 3,000 daughters and 3,000 sons. In Greek mythology, however, only about 100 of the Oceanids are actually named. Every body of water – springs, ponds, lake, sea, and even cloud – had an associated female Oceanid and every river had its male Oceanid.

They were also the rare non-Nordic inspiration for Jean Sibelius and his tone-poem Aallottarte (The Oceanides), written in 1914. The work was commissioned by two American patrons, Carl Stoeckel and Ellen Battell-Stoeckel for a 15-minute work to be given its premiere at the 1914 Norfolk, Connecticut, Music Festival. After a troubled and delayed start, where he debated the subject matter of the piece with himself, he finally started the work in early 1914. He first thought of the work as a three-movement suite for orchestra. Of those first 3 movements, he discarded the first movement and rewrote it as a single movement tone poem. He used material from the other movements in other works. He sent this one-movement score to the US for its premiere only to have the couple commissioning the work make a new offer. The initial commission was for $1,000 (about $23,000 in today’s money); now, for an additional $1,200, the Stoeckels requested that Sibelius himself come and conduct the piece and receive an honorary doctorate from Yale University. Sibelius accepted and in light of these honours, rewrote the work one more time.

Sibelius: The Oceanides, Op. 73 (Yale version) (Lahti Symphony Orchestra; Osmo Vanska, cond.)
For the final version, Sibelius changed the key, added another trumpet, added a final section, and changed the name of the work from Rondeau der Wellen to Aallottaret. For its publication by the German publishers Breitkopf & Härtel in 1915, he added the German translation Die Okeaniden and that is the name it is most commonly known by today. 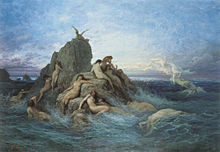 The concert at the Norfolk Festival on 4 June 1914 where The Oceanides had its premiere was an outstanding success. The critic Olin Downes said the piece was ‘the finest evocation of the sea which has ever been produced in music’. The orchestra included members from the three leading East Coast orchestras: The New York Philharmonic, The Metropolitan Opera Orchestra, and the Boston Symphony Orchestra. Sibelius considered the festival orchestra the finest he had conducted, surpassing anything in Europe. Although the musicians, at first, found the music difficult to understand, by the third rehearsal, they were delighted with the work.

Sibelius: The Oceanides, Op. 73 (Final version) (Lahti Symphony Orchestra; Osmo Vanska, cond.)
The new work concluded the first half evening’s concert – the other works were also by Sibelius, including Pohjola’s Daughter, the King Christian II Suite, The Swan of Tuonela, Finlandia, and Valse triste. The second half of the concert included Dvořák’s Ninth Symphony, American composer Samuel Coleridge-Taylor’s From the Prairie, and the overture to Wagner’s opera Die Feen. The entire evening ended with the Finnish national anthem, Vårt Land. All concert-goers felt that they were at the musical event of their lives.