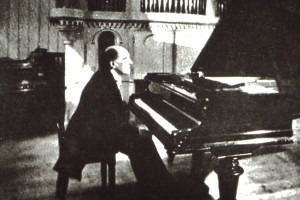 The Russian composer and pianist Nikolai Medtner (1880-1951) was utterly despised by the Russian community in Paris. Considered an old fart and hopelessly out of touch with modern times, he was even facetiously called the “Russian Brahms.” Much of this comparison rests on a “strong vein of classicism in tightly controlled structures and contrapuntal textures,” prevalent throughout his compositional oeuvre. Without doubt, both composers had a gravity of musical demeanor, and they certainly took themselves and their art with great seriousness. That kind of attitude, at the height of musical experimentations with modernist techniques in Paris between the World Wars—predictably elicited rather severe criticism. Undeterred, Medtner with help from Sergei Rachmaninoff published his treatise The Muse and the Fashion: A defense of the foundations of the art of music in 1935. Medtner discusses the essential aspects of music and the ways in which modernism threatened to erode what he considered to be essential aesthetic values. Medtner writes, “Of all existing entertainments, musical art is the most unfortunate, inactive, and uninteresting. The true function of music is not to entertain or distract, but to attract, collect, hypnotically concentrate the feelings and thoughts of the listeners. Our muse turns away from those who by their nature are not attracted to her. She punishes with severe boredom those who seek in her but the excitement of idle thought.”

Shifting style, compositional vogues and musical fads aside, Medtner considered the music of extreme modernists a comedy of errors. “Errors of theory and of practice have been observed before, but no theories of error have been known to exist in former times.” Medtner was strongly supported by his friend, colleague and admirer Rachmaninoff, who writes, “The Futurists clamor for color and atmosphere, and by dint of ignoring every rule of musical construction, they secure efforts as formless as fog, and hardly more enduring.” Rachmaninoff, in fact, considered Medtner the “most talented of all contemporary composers. He is one of those rare people—as a musician and a human being—who grow in stature the closer you get to them.” At the core of Medtner’s craft stands the lyric melody. Imbued by poetry and song, his melodies unassumingly grow into themes and are unique in their sentiment and melancholy. Everything emerges from the melodic element of his writing, although harmony and structure are important components of Medtner’s musical equation as well. It is his unique mixture of modal and tonal harmonies that maintains continuity within functional tonality. Given Medtner’s insistence on traditional tonal and formal processes, it is not hard to understand why he loathed Schoenberg, Stravinsky and Prokofiev!

The comparison between Medtner and Brahms is actually misleading, as his music is closely related to Beethoven. And Medtner makes no secret of the fact that Beethoven is his hero, at least when it comes to writing piano sonatas. “The greatest representative of this form,” he writes, “Beethoven, conceived his sonatas as one song, which by the simplicity of its theme and its vertical correlation, from the beginning to the end of each of his works, illumined to us the whole complexity of his architectonic construction and of his horizontal correlation.” In all, Medtner published fourteen works for solo piano that use the heading “Sonata.” Among them is the Sonata Reminiscenza, Op. 38, No 1. Actually, Op. 38—together with Op. 39 and 40—are cycles or suites collectively called “Vergessene Weisen” (Forgotten Melodies). The Sonata Reminiscenza is the first section of Op. 38, which also includes 3 dances, 3 canzonas, and a “coda alla Reminiscenza.” The work was written during the first years after the Russian Revolution of 1917. Published in 1922, the sonata is a single movement with the opening theme returning as a coda to the entire opus. In all, Medtner presents eight different melodies that are tightly related to each other through common material drawn from the introduction or through motivic relationships. Each theme is based upon the repetition of a motive or phrase followed by digressions and cadential material. In the development, themes are primarily varied by harmonic means resulting in a highly chromatic musical stream that contrasts with the essentially diatonic outer sections of the movement. Medtner provocatively wrote, “Inspiration comes, where thought is saturated in emotion, and emotion is imbued with sense.”