Every spring in Ueno, the cherry blossom starts to bloom, heralding the music festival fittingly entitled “Spring Festival In Tokyo”. This year the festival took place between March 14th and April 10th.

One of the highlights of this year’s festival was Wagner’s Opera “Parsifal”. The five hour piece was performed as a concert rather than its traditional stage setting. This unusual production captured everyone’s attention and proved to be a big hit of the festival. 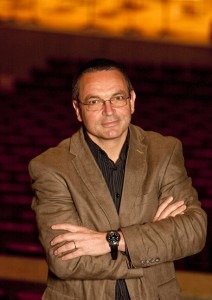 The NHK Symphony Orchestra was conducted by Ulf Schirmer, the renowned German Conductor who performed alongside well-known Wagner singers such as Burkhard Fritz(Tenor), Michaela Shuster(Soprano), Franz Grundheber(Bass-baritone) and Peter Rose(Bass) .

We interviewed Maestro Ulf Schirmer about this captivating performance.

“The theme of this opera is based on Christianity, something that is not so familiar to a japanese audience so I suggested that the singers shouldn’t be on stage the whole time. Instead when it was their scene, they should take their positions on the stage and as the scene changed, they should leave. This helped the audience to take the story in and understand it through the changes in the music.

Actually this time I came to Japan with my family. My son (21 years old) and my daughter (20 years old) told me that they could understand the story easily and they were really impressed.

“Parsifal” was the last opera of Wagner and its theme, I think, is the “relief from the pain of anxiety”. Wagner at the time was becoming more open minded towards Christianity and was influenced by Buddhism as well. So “Parsifal” can be said to be not only religious but philosophical.

The opera was composed for Bayreuth Festival Hall which was designed by Wagner himself and has special acoustics. I tried hard to create a sound similar to that of Bayreuth by positioning the singer of the voice of the God at the upper part of the stage and separating the chorus by positioning them on either side of the stage.

As for the bell, I made the sound myself using the actual sound of the Cologne Dome together with the sounds of a Bosendorfer piano.

I have visited Japan more than 16 times and love the country. I’m looking forward to returning this October to conduct “Arabella” by R.Strauss at the Opera Palace in Tokyo.”