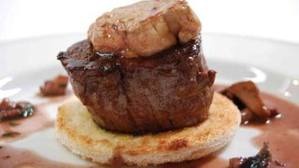 Today, we remember Gioachino Rossini (1792-1868) as the most prominent composer of Italian opera in the first half of the 19th century. But, when he was a young man growing up in Bologna he was simply known as “La Grassa,” or “The Fat One.” Contemporary audiences compared his music to the intoxicating bubbles of champagne, and Rossini once said, “I know of no more admirable occupation than eating.” By age thirty-eight, Rossini had composed thirty-eight operas, and he devoted the second half of his life to the pursuits of his belly! We are very fortunate indeed that Rossini left us a detailed analysis of his culinary philosophy. “Appetite is for the stomach what love is for the heart. The stomach is the conductor, who rules the grand orchestra of our passions, and rouses it to action. The bassoon or the piccolo, grumbling its discontent or shrilling its longing, personify the empty stomach for me. The stomach, replete, on the other hand, is the triangle of enjoyment or the kettledrum of joy. As for love, I regard her as the prima donna par excellence, the goddess who sings cavatinas to the brain, intoxicates the ear, and delights the heart. Eating, loving, singing and digesting are, in truth, the four acts of the comic opera known as life, and they pass like the bubbles of a bottle of champagne. Whoever lets them break without having enjoyed them is a complete fool.”

However, references to food also appear with some regularity in his operas, as for example in Don Magnifico’s second act aria in La Cenerentola (Cinderella), which mentions sturgeons, marinades, cakes, buns, vanilla and countless other culinary treasures, and of course the famous “Di tanti palpiti” from Tancredi, which is known as the “rice aria,” as Rossini composed it while cooking a batch of risotto. 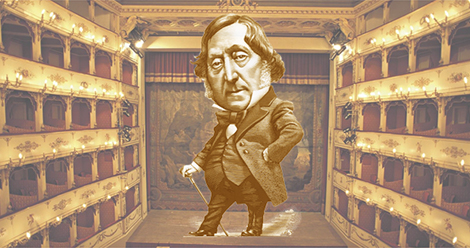 Between 1824 and 1836, Rossini was director of the Théâtre Italien in Paris, and the most exclusive restaurants competed for his patronage. Parisian chefs could not wait to invent new dishes for “The Maestro.” A dish à la Rossini had to contain three key ingredients; black truffles, foie gras, and Madeira wine. Marie-Antoine Carême, also known as “The King of Chefs,” who famously claimed that, “Rossini is the only one who truly understands me,” whipped up a number of culinary creations, including a “Stuffed Turkey à la Rossini,” “Fillet of Sole à la Rossini,” “Eggs à la Rossini,” and most famously, “Tournedos à la Rossini.” The name of the dish supposedly originated with the composer’s butler, who was obliged to “tourner le dos” (turn his back) on the diners to hide the secret final touches while carefully preparing the recipe under Rossini’s supervision. Lucky for you, on Interlude we never turn our backs on diners or listeners, and with apologies to the good people of California who are now legally prohibited from consuming foie gras, here is the ready-make recipe:

Four 150g tournedos of filet steak, each 3cm thick
Four slices of French bread
150g of butter
A glass of Madeira wine
A spoonful of flour
A glass of beef stock
Four round shapes of foie gras, floured and sautéed in butter
Four slices of Norcia truffle, cut thick, salt and pepper.

Tie the tournedos so that they keep their round shape during cooking. Brown in butter until medium-rare, add salt and pepper, then remove the string. Place on a warm serving dish

Cut the slices of bread to the same size as the tournedos and brown them lightly in butter.

Braise the round slices of foie gras, which should be slightly smaller than the tournedos on a very hot flame for fifteen seconds each side.

Blend the last piece of butter with the flour and put the mixture into the saucepan, then dilute it with the boiling stock, pour in the Madeira wine and reduce.

Arrange a tournedos on each bread slice, place the foie gras slice on top and generously garnish with three slices of truffle.

Drizzle the Madeira reduction, having slowly added additional truffle pieces over the Tournedos when ready to serve.

To accompany this sumptuous dish, may I suggest a hearty red from the Listrac Médoc region? How about a 2010 Château Pontet Canet, a deep crimson with a rich bouquet of blackcurrant, liquorice and preserved fruits with hints of cedar, and cocoa. If 2000 US dollars a bottle are slightly above your budget, how about a dark and concentrated claret from Château Meyney, with the rich aroma of ripe blackcurrant, smoke, prunes, truffles, coffee and cherries. Alternatively, you might also choose a sumptuous wine from Chateau Les Tonnelles with flavours of black fruits, raspberries, pepper and spices. And if you have ever wondered why Rossini was called “The Fat one,” wonder no more. It is reported, that he could devour more than twenty Tournedos cutlets in a single meal! Viva la Figaro!