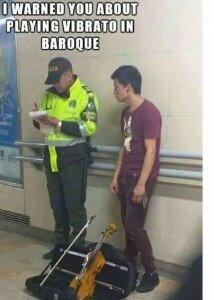 Vibrato can make you feel more than what is intended. String instruments pronounce it, woodwinds make it felt, brass, well maybe it only slightly works for them, but the human voice excels with applied vibrato.

Select and functional vibrato can change the whole tone of a song or a piece of music. There are different types of vibrato that alter the shape and sound of music. In its most basic form, vibrato is a fluctuation in pitch, but it can change the intensity and the feeling of the music.

Jokes about the use of vibrato have been around for some time. You’ve perhaps seen that meme on social media of the police booking a baroque violinist for using vibrato. A number of people think vibrato is used to hide the fact that certain singers have a hard time getting to pitch and disguise their inability to hit a note smack on by applying vibrato.

Many electric guitars come with what is known as a whammy bar, or in other words, a lever that allows a player to apply vibrato when it’s not possible to do with your fingers as a violinist or other string players can. And, there’s an instrument called the Vibraslap. You may not have heard of its name, but you may have heard it in a piece of music. It has a wooden box filled with loose metal rods that are connected to a handle. This is held in one hand and the rods vibrate inside the box when a ball on the top of the handle is slapped. So, you might see how the effect of vibrato has shaped instruments.

The human ear is attuned to vibrato, and for certain styles of music, it is expected. But this wasn’t always the case. Vibrato came into constant use in the 19th century. While it was used in the 16th, 17th, and 18th centuries, it was not expected and taught the way it is today. The never-ending debates about using and not using vibrato fill the internet, singing schools and general music lessons.

When applied by the human voice, this is where vibrato can change the whole mood of a piece. Barbara Streisand is a singer who uses vibrato so well it has basically become her trademark, though she would probably not agree with this. In The art of vocal perfection (With Barbra Streisand), you can hear the many shades of this amazing singer’s use of vibrato. In her movie Yentl, this is where you can experience the full impact of how Streisand’s vibrato makes great music even better.

While vibrato sounds natural, it’s not a process that is easy to control or apply correctly. Making it sound at the right moment, in the right manner to add that touch of colour that can make music special takes years of practice.

Vocal vibrato is harder to control over instrumental vibrato. The speed of vibrato is much trickier to regulate, and it is more noticeable in the human voice than it is through a musical instrument. If the vibrato is applied too fast, a singer can sound like a goat bleating. Too slow and it may not fit in with the music and set up an unpleasant wobbling effect between voices.

The British conductor Roger Norrington is an advocate for playing classical music in the style of its day. Some people call Norrington a period-performance evangelist and have made scathing remarks about what he is doing to music by removing the sound of vibrato. His conducting of Mahler’s 9th Symphony at the Proms in London in 2011, and his treatment of some of Elgar’s music has brought howls of derision from many in the music world. As a composer, I have written pieces that specifically require non vib, no vibrato.

Vibrato is not something that a performer should apply to every piece of music, regardless. The sound of non vib creates a sombre stillness that profoundly affects the music and the listener. For me, experiencing non vib is like the sound of human breath. It is calming, still and even. It paints a certain colour when used in an orchestra and makes the music standout with authority. It sets up a difference.

Some have said that vocal vibrato is incompatible with tonal clarity. I can’t agree. Like any effect or articulation, it is there to push the music towards an emotion that the composer wants expressed.

Imagine hearing Sarah Vaughan, Barbara Streisand or Luciano Pavarotti without their well-controlled and dynamic vibrato. The music would not be anywhere near as affecting or beautiful. In this rather odd video, you can hear how Pavarotti applied vibrato to almost every note over his voice range. The last couple of notes are not Pavarotti, but it will leave you in no doubt the power of vibrato.