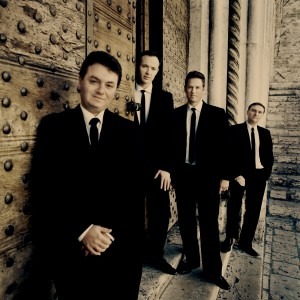 Regarded by the Times as having ‘passion, precision, warmth, a gold blend’, the Jerusalem Quartet was founded in 1993. Since then, it has been active in the international music scene, performing worldwide and collaborating with renowned performers like Mitsuko Uchida, Jessye Norman and Natalie Gutman, to name a few. Even Maestro Daniel Barenboim generously loaned his former wife, Jacqueline du Pré’s ‘Sergio Peresson’ cello to Kyril Zlotnikov, cellist of the Jerusalem Quartet. The four members are violinist Alexander Pavlovsky, violinist Sergei Bresler, viola player Ori Kam and cellist Kyril Zlotnikov. JQ is participating in the Hong Kong International Chamber Music Festival 2013, presented by the Premiere Performances of Hong Kong.

JL: How did the Jerusalem Quartet begin?

JQ: The JQ was formed while the members were students in a high school for music in Jerusalem. The school forms chamber groups for the students. With the help of the coach Avi Avramovich, the group quickly showed promise and passion for quartet playing. Because of this, the quartet was encouraged to continue its work after the end of the school year.

JL: Is there any special meaning behind the name of the quartet?

JQ: No special meaning. Three of the members grew up in Jerusalem, and currently two are living there.

JL: What makes the magic between four players?

JQ: A string quartet is the perfect chamber group because four voices is the maximum number of voices that can independently play at the same time. With five voices, there is a necessity for two voices to play the same line. Three voices offer less sound possibilities. The balance between team work and individual expression is what makes magic in a string quartet. Combine it with four players who know each other well, and who speak a common musical language, and you get real magic.

JL: I know that you performed a lot of Brahms and Mozart in the past seasons. Are there any composers for whom you have a special affinity?

JQ: Each composer we play is our favorite composer at that moment. We try to develop a relationship with the composer and his musical language. Because three of the quartet’s members were born and grew up in the former USSR, the quartet has had a special relationship with the music of Shostakovich. But that does not mean that playing Haydn or Beethoven is any less meaningful for us.

JL: Is there any quartet which you regard as role model?

JQ: Our quartet has had some incredible opportunities to play and learn from some wonderful musicians. Members of the Amadeus, Alban Berg, Guarneri, and Emerson quartets have greatly influenced our playing. I think that we try to take the best from each of these masters and make it our own.

JL: Apart from performing and rehearsing, do you see each other outside of work?

JQ: A quartet has a very special relationship. We spend about six and half months in a year traveling together. On tours we spend a lot of time together, on and off stage. Between the tours we meet less since we don’t all live in the same place. But when we are in the same place, and when our families are with us, we get together. With all the children and spouses it is like a big family.

JL: What are you bringing to PPHK’s International Chamber Music Festival in HK?

JQ: We are very excited to come to HK for the first time. The roster of artists who will be at the PPHK is fantastic and we very much look forward to collaborate with some of them. We will be performing some wonderful pieces like the Shostakovich piano quintet and Mozart’s string quintet, alongside some well-loved quartets by Borodin, Beethoven and Smetana.

Smetana, Quartet No.1 “From My Life”