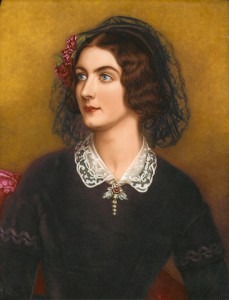 King Ludwig I of Bavaria had the somewhat conceited habit of having his lovers, real and imagined, portrait by the royal painter Joseph Karl Stieler. When the Bavarian Revolution forced his abdication in 1848, he possessed a proud collection of 36 paintings housed in the “Gallery of Beauties” in the Nymphenburg Palace in Munich. By the way, you can still admire this collection today. Among the featured beauties is a certain Lola Montez, actually born Eliza Rosanna Gilbert in Limerick, Ireland. Ludwig I not only bought her a big house and made her Countess of Landsfeld, he apparently also enjoyed spanking her bare bottom. Lola, who fancied herself a dancer, actress, courtesan, mistress, entertainer, lecturer and even a social reformer, had a wealth of talents and plentiful assets, all represented — if we are to believe contemporary opinion — by a pair of magnificent, spectacularly shaped and ample breasts. It is therefore hardly surprising that Ludwig I and Franz Liszt would have been drawn to such luxuriousness like bugs to an open flame. Franz Liszt either met Lola in Paris or Dresden in 1844, shortly after she had made her rather unsuccessful Parisian stage debut as a dancer in Fromental Halévy’s opera, Le Lazzarone.

Lola was certainly eager to capture a husband of fame, stature and considerable wealth — her previous two marriages to Captain James and Captain Lenox had ended in tears and in court, respectively — while Franz undoubtedly wondered what all that fuzz about her two glandular protuberances was all about. On first meeting, Lola — who was delicately referred to as “La Grande Horizontale” in the English press — was said to possess a child-like charm that could easily melt lead. Yet, below this calm and inviting demeanor hid a fiery cauldron of seething temperament. She certainly would not hesitate to slash the face of any bothersome man with the whip she always carried, and if an unfortunate lover proved disappointing, she would eagerly reach for her pistol and make the poor fool run for his life. The affair between Lola and Franz surely burned at the temperature of nuclear fusion, yet correspondingly, was rather short lived. For one, Lola got jealous of all the attention Franz received from his female admirers. Concordantly, Liszt’s reputation as the greatest lover of his age was being severely tested by Lola’s persistence. One morning, while Lola slept, he locked her into their hotel room and fled. He even bribed a hotel porter to keep her secure for at least twelve hours, and left ample funds at the front desk to help pay for the impending bullet damage to furniture and inventory. Once released, Lola doggedly pursued Franz from town to town, eventually catching up with him in Bonn. Following a series of highly acclaimed concerts — performed by a whole host of luminaries in honor of the unveiling of the Beethoven Monument in August 1845 — King Wilhelm IV and his queen Elisabeth Ludovika of Bavaria hosted a dinner banquet for 550 invited guests. Among the diners that evening we find the composers Hector Berlioz, Giacomo Meyerbeer, Ignaz Moscheles, Félicien David, and of course, Franz Liszt. Also present were the conductors Charles Hallé and Sir George Smart, alongside the baritones Josef Staudigl and Johann Baptist Pischek, and the sopranos Jenny Lind and Pauline Viardot. Just in case you were wondering, Lola Montez was not invited. However, such technicalities had never made a strong impression on her and she quickly crashed the party claiming to be Franz Liszt’s personal guest. Not only did she upset the pre-arranged seating arrangement, but according to legend, also leapt on a table and freely bared her assets. By all accounts, her dance routine failed to inspire much applause and numerous guests fled the banqueting hall despite a torrential thunderstorm raging outside. The embarrassment to Franz was considerable, and when Bonn celebrated the Beethoven centenary in 1870, he was not invited. Be that as it may, Lola’s performance was certainly a relationship stopper, and by November 1845 we find Franz Liszt in the arms of the beautiful and highly influential courtesan Marie Duplessis — more about that next time. Not known as a child of sadness, Lola became mistress to Ludwig I in 1846, and when the revolution forced him to abdicate in 1848, Lola married the cavalry officer Trafford Heald — who recently had come into a rather large inheritance. In 1851 she divorced Heald and sought a fresh start in America, initially performing and acting in the eastern US. By 1853 she had made her home in San Francisco — married to the local newspaperman Patrick Hull — and during a tour of Australia entertaining miners she “raised her skirts so high that the audience could see she wore no underclothing at all.” Once home in America, she briefly lectured on gallantry but suffered a stroke and died short of her fortieth birthday. The State of Nevada named a lake after her, and the tallest mountain in Nevada County, California — appropriately named “Mount Lola” — bares lasting resemblance to her most famous asset!