Frederick the Great and his greatest Obsession 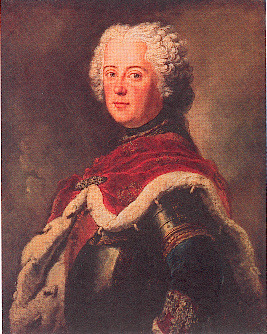 Frederick II, of Prussia, subsequently known as Frederick the Great, was the eldest surviving son of Frederick William I and Sophia Dorothea of Hanover, the sister of George II of England. Daddy Frederick, who loved horses and seeing soldiers being chopped in half on the battlefield, was a rather miserable sort, as he habitually administered savage beatings to his wife and his kids. When his son demonstrated an early interest and talent in music and French literature, he imposed a soldierly regiment of the strictest discipline, which included more beatings and public humiliations. He also decreed that the Crown Prince must deny himself “operas, comedies, and other follies of the laity.” With the aid of his mother and his older sister Wilhelmina, Frederick did escape military duty and was secretly educated by French tutors. He read countless volumes of poetry, the Greek and Roman classics, French philosophy and, most importantly, devoted himself to the study of the transverse flute. 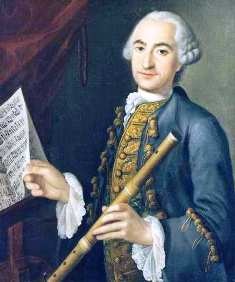 In 1728, Frederick heard a performance by the virtuoso flutist Johann Joachim Quantz in Dresden, and he quickly persuaded his mother to secretly invite the master to give him private flute lessons. Daddy Frederick found out soon enough, and as can easily be imagined, gave his son a good hiding. Tellingly, he disapprovingly called his son “a poet and a flutist,” not merely frowning on his son’s artistic inclination but also condemning his “unnatural” sexual orientation. Rumors at court suggested that Frederick had been spending entirely too much time with Hans von Katte, a handsome Lieutenant in the Royal Guard and son of a General at Königsberg. In 1730, Frederick and Hans decided that they could take it no more, and together with a couple of accomplices, attempted to escape to Frederick’s relatives in England. However, the teenage lovers were soon caught and accused of high treason. Frederick barely escaped with his life and was imprisoned. Hans, on the other hand, was not that lucky. He was publicly executed by sword, with Frederick being forced to watch his lover’s decapitation. 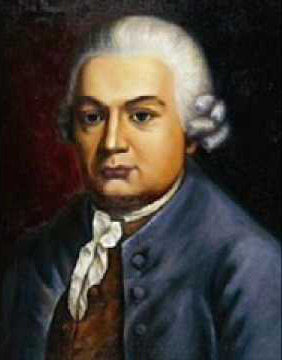 When Frederick became King in 1740, he not only attacked Austria and claimed Silesia — a historical and resource-rich region in Central Europe located primarily in present-day Poland — but he also employed a group of eminent musicians and established one of the most stimulating musical environments in 18th-Century Germany. Johann Joachim Quantz entered into his service in 1741, and was hired as chamber musician and flutist. He joined Carl Heinrich Graun who functioned as Kapellmeister and was charged with the composition of operas and cantatas. The new court opera, which had been dormant during Daddy Frederick’s rule, opened in 1742 and Graun’s Cesar e Cleopatra marked the grand occasion. Graun’s brother, Johann Gottlieb was invited to join the court as concertmaster, and the Bohemian musicians Franz and Joseph Benda were hired as violinists. 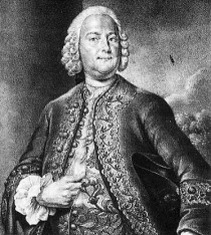 In 1738, Carl Philipp Emmanuel Bach — fifth son of Johann Sebastian Bach and Maria Barbara Bach — was appointed as harpsichordist and court composer. In all, Frederick employed close to fifty musicians. Besides enjoying at least two operatic performances during Carnival season, the King also entertained regular evening concerts at his residence, Sans-Souci, near Potsdam. The composer and soloist was always Quantz or the King. In all, Quanz composed 296 flute concertos and roughly 200 chamber-composition featuring the flute, which he was not allowed to publish without Frederick’s permission. In his spare time, he also penned the highly influential treatise On Playing the Flute, which he published in Berlin in 1756. The King himself wrote 121 flute sonatas and 4 flute concertos, and it is hardly surprising that Franz Benda proudly remembered in his autobiography that, “he accompanied the King at least ten thousand times during his career.” By all accounts, Frederick was an able performer, whose execution of slow movements was highly praised. However, in fast movements he is said to have taken undue liberties with the tempo, prompting C.P.E. Bach to exclaim “Oh, what rhythms!” Of course, Quantz and Graun collected 2000 Thalers annual salary, while C.P.E was stuck with only 300! Nevertheless, C.P.E. served Frederick the Great for nearly thirty years. And the “Principessa,” as the King affectionately called his flute, remained an integral part of his daily life. Since he never married, he had plenty of time to practice and he always longed to have his instrument near by. He even had it delivered to the battlefield, so that the soothing and sweet melodies would chase away the bitter taste of war.