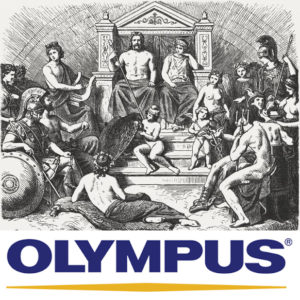 Logo of Mount Olympus and the 12 Olympian Gods

In the universe of global consumerism, branding is everything. Establishing a brand strategy and logo lets potential customers know what your company is all about, and what people perceive it to be. Whether it is Apple, Google, Amazon or Coca-Cola, brand recognition and popularity are the name of the game. But did you know that some of the most iconic brands and logos are based on Greek Mythology?

Take for example “Olympus,” the Japanese manufacturer of optics and reproductive products that has been going strong for over 100 years. Its name is based on the mythical home of the gods in Greek mythology. Mount Olympus is not only the tallest mountain in Greece, it is also the home of the 12 Olympian gods: Zeus and his wife Hera, Athena, Poseidon, Artemis, Apollo, Demeter, Hester, Aphrodite, Hermes, Hephaestus and Ares. Hades, as you might know, resides in the underworld and he is not technically considered an Olympian god. I wonder if the “Olympus Corporation” knows that clouds constantly obscure the peak of Mount Olympus, and it is therefore forever shrouded from human eyes.

Logo of Nike and the Greek Goddess

And now for a bit of trivia; what multinational corporation was founded as Blue Ribbon Sports in 1964? I give you another hint. When it changed its name in 1971, it also introduced the “Swoosh” logo. Of course, I am talking about the American athletic shoe and apparel designer and retailer “Nike.” You may well ask what a footwear company has in common with the Greek goddess of personified victory? Nike and her four siblings are daughters of a Titan, and they were close companions of the almighty Zeus, with Nike taking the role of the divine charioteer. Nike flies around battlefields and rewards the victors with glory and fame. She is commonly portrayed with wings in statues and painting, and known as the goddess of strength, victory, and speed. So there you go, every time you lace-up a pair of “Nike” sneakers, you will be victorious. At least that’s what the company wants you to believe. 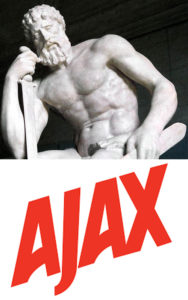 Logo of Ajax and the Greek mythological hero

When the American multinational company “Colgate-Palmolive” introduced a powerful household cleaner in 1947, they decided to name the product “Ajax.” The slogan for the original Ajax scrubbing powder was “Stronger than dirt!” In Greek Mythology, Ajax was certainly stronger than a lot of things. He is portrayed as a towering figure and warrior of great courage in Homer’s Iliad, a series of epic poems about the Trojan War. One of the most important events in Greek mythology, the Trojan War is the bloody battle between Greeks and the city of Troy, after Paris kidnaps the beautiful Helen from her husband Menelaus, the King of Sparta. Ajax is fighting for the Greek side, and Homer describes him as “fearless, strong and powerful, but with a very high level of combat intelligence. Ajax commands his army wielding a huge shield made of seven cowhides with a layer of bronze.” He is the only hero on either side, who does not receive substantial assistance from any of the gods, and he is not wounded in any of his numerous battles. Given such heroics, the soapy grim in your bathtub does not stand a chance. 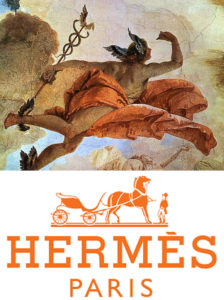 Logo of Hermès and the Olympian God of Trade

Thierry Hermès was born to a French father and a German mother, and he shared his family name with the Greek god of trade, merchants and commerce. The Hermes of Greek Mythology was the messenger of the gods, who freely moves between the worlds of the mortal and the divine. He is the only character who freely moves in and out of Greek Hell, known as Hades. But Hermes is also a bit of a trickster, outwitting other gods for the benefit of mortals. Homer calls him a “guide and guardian,” and he was believed to have been the inventor of many types of racing and the sports of wrestling. As such, he was considered the patron of athletes. So you may well ask what the patron of athletes has to do with the international French high fashion luxury goods manufacturer “Hermès,” specializing in leather, lifestyle accessories, home furnishings, perfumery etc. The answer is very little. You see, the family business “Hermès” initially specialized in creating high-quality wrought harnesses and bridles for the carriage trade. As such, the company logo is not a winged messenger of the gods but a Duc carriage with horse.