Opinion
The Future is Live(streaming)
by Chris Lloyd March 26th, 2020 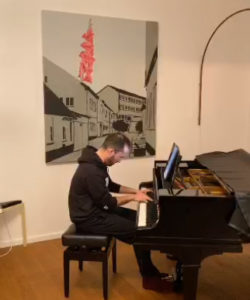 Today is March 26th, 2020, the 15th day of a first self-imposed, and now state-imposed isolation period.

And I’m already sick of the live-streaming pandemic that has hit us.

Don’t get me wrong – I enjoy solidarity as much as the next person, but I have concerns about what our newly-discovered passion for online over-sharing might herald for the future.

At some point over the past two weeks, most performing artists around the world had their primary source of income cut off with the closure of venues and prohibition of large gatherings. An entire industry (and not a small one, mind you) was instantly shocked into finding new means of subsistence in the face of a lengthy and unknown period of unemployment.

What followed was a huge online response which saw musicians (from buskers to leading professionals), organisations (from independent ensembles to national orchestras), and venues (local pubs to concert halls) putting their music and performances online for free. The Berlin Philharmonic abolished the digital subscription fee for its Digital Concert Hall, whilst the Met Opera and Royal Opera House offered similar, no-charge streaming options; even Igor Levit started playing from his living room in a sign of solidarity – and we all thanked him for his time and goodwill.

Meanwhile, contemporary classical and experimental music venues broadcast performers playing to empty rooms as if nothing had changed (…), whilst in popular music, Berlin-based #UnitedWeStream provides an example of a platform allowing several clubs to band together and solicit donations whilst live-streaming DJ-sets onto your device. Social media channels are awash with smaller organisations and individuals linking to PayPal accounts in the hope of eager fans contributing mid-performance, whilst many more are simply ‘putting it out there’ for the fans.

So, in the moment of crisis, musicians stood up to support the community.

We also inadvertently bought into the wider community’s mindset that music is inherently worthless, and they don’t need to pay to access it anymore.

As we know from looking backwards, music has been on a steady downward spiral on the ‘value-chain’ for over a century. It has evolved from a product that required a performer to make it happen (pre-recording era); to a product that could be purchased (either via LP/Vinyl, Radio, tape, CD); to a product that was freely available online through streaming services such as Spotify or YouTube. And just when you think music couldn’t become more ‘free’ (in the financial sense), our entire industry freaked out at the first ripple of a crisis and threw live performance (essentially the only thing audiences still pay for) out there, hoping someone would tune in.

So what was the impetus for such a sudden industry-wide push to live-streaming anything and everything – was it our enduring fascination and obsession with applause? Or an ill-judged attempt at ‘business as usual’? At best, we sensed an opportunity to recuperate lost earnings through a donation system that relies on the general populace valuing our ability to offer respite through challenging times. At worse, we just bought into every gig promoter who said “we won’t pay you in cash, but you’ll get great exposure.”

Whatever the case, I fear the current scenario has confirmed the subconscious belief that musicians and performers are niceties to be enjoyed, rather than necessities that can offer real value. Just as no one expects grocery stores to stock their shelves with free, donation-based supplies, or for Netflix/Amazon/Spotify to make their services free, neither should we use this crisis to showcase our skills and community contributions for no reward. Ex-California Symphony Director and Arts Consultant Aubrey Bergauer touched on these topics when addressing the issue with free concerts, and I believe our current push to put as much content online, whilst asking for no financial commitment from listeners/viewers is even more dangerous in the long term than temporary closures and cutbacks.

What could this look like? For sure there is someone in Silicon Valley or Zhongguancun developing a platform now that works like Netflix – a subscription based – or Spotify – freemium/ad-supported format – where subscribers can choose whatever live event they want to watch, with ‘minutes-watched’ measured to pay the performers (Twitch and StageIt are two potential short-term options). Surely if all the leading orchestras and opera houses in the world combined to invest time and energy into creating together a one-stop, high-quality platform, it would better serve audiences and performers alike moving forward.

Classical music has historically loved letting the ball-drop when it comes to tech innovations and how it affects our industry (e.g. Naxos launched their music streaming service in 1995, yet in 2020 classical record labels are still playing catch-up). We have an opportunity now, with entire countries filled with people at home looking for entertainment, to truly showcase our value – and we can do far better than agreeing that it has none by offering it online for free.