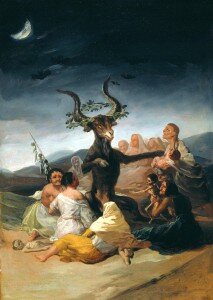 The murderous composer lies abed, dreaming fevered dreams about the love that he lost and the evils that he did….or was it all just an opium-induced nightmare? In his 1830 work, the French composer Hector Berlioz wrote a symphony that broke all the strict of the symphony. He took the normal four-movement structure and its set movement forms, and created a new world of the romantic. The Symphony Fantastique (Fantasy Symphony) was written in an unusual five movements and Berlioz provided a story for each movement

For each movement, Berlioz wrote a detailed description. Sometimes, he sketches out the action in detail, and other times, he provides just a hint of the content. For movement 1:

The author imagines that a young vibrant musician sees a woman who unites all the charms of the ideal person he was dreaming of, and falls desperately in love with her. The beloved image never presents itself to the artist’s mind without being associated with a musical idea (the idée fixe), in which he recognises a certain quality of passion, but endowed with the nobility and shyness which he credits to the object of his love.

This melodic image and its model keep haunting him ceaselessly. The transitions from this state of dreamy melancholy, interrupted by occasional upsurges of aimless joy, to delirious passion, with its outbursts of fury and jealousy, its returns of tenderness, its tears, its religious consolations – all this forms the subject of the first movement.

The key here is the idée fixe – the haunting image. Every time our hero thinks about or sees his unnamed beloved, the same melody appears. It was a brilliant innovation of Berlioz’ because it made it possible to follow the hero’s thoughts – the melody appears and you know who he’s thinking about. 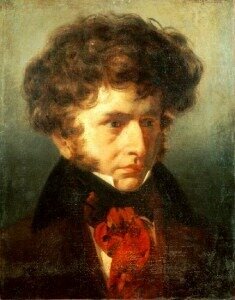 The artist finds himself in the tumult of a festive party, yet everywhere, whether in town or in the countryside, the beloved image keeps haunting him and throws his spirit into confusion.

One evening in the countryside he hears two shepherds in the distance dialoguing with a pastoral duet. The setting restores to his heart an unaccustomed feeling of calm and gives him happier thoughts. He broods on his loneliness, and then has a terrible thought: what if she betrayed him! Mingled hope and fear, ideas of happiness disturbed by dark premonitions, form the subject of the adagio. At the end one of the shepherds resumes his song; the other one no longer answers. Distant sound of thunder … solitude … silence….

Convinced that his love is unappreciated, the artist poisons himself with opium. The narcotic plunges him into a heavy sleep accompanied by the strangest of visions. He dreams that he has killed his beloved, that he is condemned, led to the scaffold and is witnessing his own execution. The procession advances to the sound of a march that is sometimes sombre and wild, and sometimes brilliant and solemn, in which a dull sound of heavy footsteps follows without transition the loudest outbursts. At the end of the march, the first four bars of the idée fixe reappear but it’s interrupted by the fatal blow of the guillotine.

This work was like nothing that had ever been heard before – the intensely personal vision of Berlioz’ was foreign to the idea of the staid and formulaic symphony and in bringing this Romantic vision – or, perhaps, Romantic nightmare – to the orchestra stage, he changed the entire world of the symphony.

If we concentrate on just the last movement, we begin, as we have in many other dark scenes, with skittery violins, before the entry of the low brass. Then, after the opening movement, we hear HER melody, the idée fixe, played on a clarinet (01:25) first as a grotesque dance and then (01:45) even more jokelike, joined by other woodwinds. We have the church bells (03:00) and then (03:25) the ‘Dies irae’. The sound on this recording is probably unlike any other; the conductor, Roger Norrington, chose to orchestrate this with an instrument, the ophicleide, that was familiar in Berlioz’ day but which is now out of the repertoire. It seems like it could be a bass tuba, but has a reed-like sound. Listen in particular at 09:12 for a whispery percussive sound – these are the violins, imitating skeletons by striking the strings with their bow hairs, rather than pulling across them as they normally play.

In these videos, you can see the effect in the violin sections:
at 08:16 Berlioz: Symphonie fantastique (Bernstein) – 5th movement only

Berlioz was a master of orchestration and the Symphonie fantastique was a wonderful opportunity for him to show everything both of this world and of the supernatural – his dreams and his nightmares.