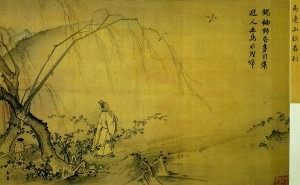 ‘Dead air’ to a radio presenter is like the name of ‘Lord Voldemort’ to ‘Harry Potter’… must not be named, nor heard. This moment of speechlessness creates an anxiety between the presenter and the listener as if the earth has suddenly stopped rotating. Yet, silence can be a powerful force in the arts.

Evgeny Kissin is a pianist who I would avoid interviewing on the radio, though I have great admiration for his playing. Recently, I attended a talk, organized by the University of Hong Kong. Professor Daniel Chua was brave enough to have a dialogue with Kissin in front of an audience. Why would I use the word ‘brave’? Well, because Kissin speaks very slowly, with long pauses; each word comes out with an effort. I expected the audience to be restless, but to my surprise, they were so focused as if they were waiting for jewels to come out of Kissin’s mouth. During these pauses, you can feel the ticking of his brain and the concentration of the audience. Silence, was thus filled with an atmosphere, a tension, an expectation and above all, sincerity.

My piano teacher at the Royal Academy of Music, Fou Tsong’s wife, Patsy Toh used to tell me that rest on a score does not literally mean ‘to rest’. It is the moment to create contrast between sound and silence, to let the music breathe, and to capture the attention of the listeners. Even though my fingers are not moving, my mind should be extremely active in order to create music without sound. This technique can be applied to other art forms. I once acted and danced in a production. Both my dancing tutor and drama tutor told me the same principle- when the body is still, the mind keeps moving. The mind gives meaning to silence and stillness.

The Legend Lin Dance Theatre (無垢舞蹈劇場) from Taiwan gives a good demonstration of the power of stillness and silence. Its founder Lin Lee-chen (林麗珍) is named one of the eight most significant choreographers in the world by ARTE. Though established in 1995, this dance group has only 3 productions; each creates a sensation in the world- Miroirs de Vie (醮), Hymne aux Fleurs qui Passent (花神祭) and Song of Pensive Beholding (觀). The last one, which took nine years to create and refine, came to Hong Kong for the World Cultures Festival, presented by the Leisure and Cultural Services Department. Lin’s minimal approach to movement demonstrates a powerful dance vocabulary – move as if not moving, be still as if moving (動如不動，不動如動). As Guy Darmet, the Artistic Director of Lyon Dance Biennial once described, ‘every motion in the dance takes my breath away.’ I shared the same feeling.

In Chinese painting, it is important to leave empty space (留白) for imagination, for example Ma Yuan (馬遠) from the Song Dynasty was famous for leaving space in his painting. In terms of qin (古琴) music, the area between sound and silence is where beauty lies.

Very often we see performers moving or talking endlessly on stage, and the set being changed vigorously in order to keep the attention of the audience. Perhaps the next step forward in the arts is to conquer our fear in stillness and silence on stage, and to make use of its power artistically. It is exciting to include as much as possible to create diversity, however, it is more important to judge what not to include. As the Scottish poet Thomas Carlyle said, ‘Silence is of Eternity’.