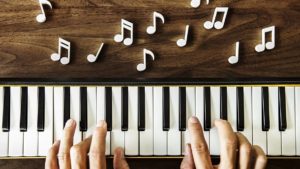 Musical gestures in some films are all about mirroring or inferring movement. But, as we see in certain movies like Hitchcock’s Vertigo, the music suggests the mental condition of the lead character, Jimmy Stewart, who suffers from vertigo. This spinning music mirrors the effect that vertigo has on Stewart’s mind. You could call this music an audio depiction of a character’s psychological trait, or even a musical motive of a personality temperament.

When specifically composed music was first created for films, a lot of it was about synchronising music to movement. In the Crew and The Village scene in the first of the many versions of King Kong, as the chief walks towards the crew, the music by Max Steiner steps out the chief’s actions. Added to what we today call these simple music devices for film, sound production for movies in the 1930s was fairly basic compared to today’s efforts. In this video, we can see how Early Sound Film Production techniques took place.

Today, many companies across the world provide specialised sound designs to movie production houses. Some sound designs are all digital, but many are still natural and recorded sounds. In later versions of King Kong, the sound design added much greater emphasis to the music and the action. 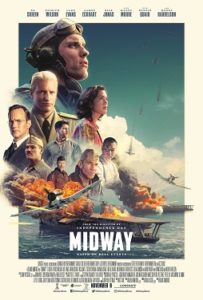 All this hyper-realistic sound design and the music add serious psychological depth to what we see in picture theatres today. Added to that, being subjected to the sound of a movie on professional theatre speakers can fill your head and stomach with gut-wrenching audio.

I remember experiencing the movie Midway, in Sensurround sound when it first came out in 1976 in a picture theatre in Sydney. The sound of the battle was so loud it shook my lollies from the box they were in.

Exposing a psychological narrative or making a statement about someone’s mental state is where movie music can say it all.

Music that accompanies the death of a hero in a movie can rarely be construed to say anything other than a summation of an immense loss. The specially composed song Philadelphia by Neil Young for the ending scenes in the movie Philadelphia, fills the need to round up all the experiences of the hero’s (Tom Hanks) life into one four-minute song. It says everything about his life and how we feel about his death. 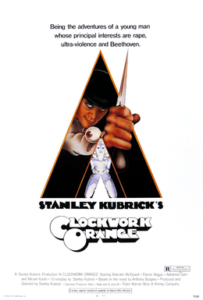 But instrumental music by itself has been shown to produce different patterns of response across a range of people. Because it’s not connected to or speaking of a visual which unites the two.

The neurological changes we go through when experiencing music are quite extended. Such as pushing us into states of excitement or confusion, plus music also changes our blood pressure and pulse. And all this just from the vibrations of air.

The layers of ideas and suggestions that film music offers on a simple level are about adding further expression to the visuals. On a psychological level, film music can completely alter the feeling response from the action.

The 1971 movie A Clockwork Orange was directed by Stanley Kubrick; he is famous for using odd music in odd places. When Alex, the lead character and his gang torture a couple in their home, Alex belts out the tune, Singing in the Rain. This disturbing scene takes that happy tune and turns it into something sinister; such is the power of music.

A Clockwork Orange – I’m Singing In The Rain

As a composer, it’s not easy developing music that a director asks you to explain or expand on the psychological situation of a character in a film. I had the chance to create the music for a short film called Life, a few years back; there was only one character and little dialogue. The director, Gary Stanford, wanted the music to speak of the actors (Craig Alexander) inner torment. Now, this was a task, because I understand what it feels like for me to go through psychological stress, but for another person, it could be totally different.

Apparently, Craig Alexander the actor in Life did a superb job of portraying this and other facets of human suffering as he won best actor in the 2018 Canberra Short Film Festival. I hope my music contributed to explaining the suffering that the character went through in Life.

The psychological strings that film music pulls inside us, is there to twist the knife into our emotions. It’s there to help us understand what is going on and to get under our skin, in a good way, and sometimes, in a disturbing manner. Film music can say a little, or it can say everything, but it never says nothing.