Features
The Newest of the New: The Hermes Experiment
by Maureen Buja August 6th, 2020 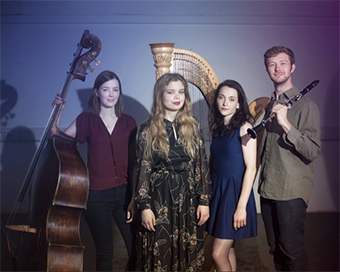 When four music graduates of Cambridge get together, you never expect the expected. Singer and co-director Héloïse Werner, clarinetist Oliver Pashley, harpist Anne Denholm, and double-bassist Marianne Schofield got together after graduation to create The Hermes Experiment. Shortly after they started, they added their fifth group member, Hanna Grzeskiewicz, a non-playing co-director (with Héloïse) of the group. She functions as the manager, seeking out relationships and smoothing the way for the group’s work.

In finding their name, they eschewed the usual Ensemble and Group titles and chose a name that reflected their position: experimentalists and communicators. Hermes, of course, is the divine trickster, but also the messenger of the gods and it is as in his role of messenger that the group invokes his name (we’ll ignore the fact that Hermes is also the name of the e-mail server for Cambridge).

They’ve been working together as an ensemble for six years and recorded their first album, Here We Are, in October 2019. It had its release on Friday 24 July, on Delphian Records.

For those inclined towards digital recordings, it can also be found on Apple Music, Spotify and other similar sources.

It’s an interesting ensemble – at its most fundamental, it consists of a bass, a chordal instrument (the harp), a melody instrument (the clarinet), and a voice. Yet, this is a unique ensemble for which all music must be either commissioned or arranged by themselves. The timbre of the instruments makes it sometimes difficult to tell what instrument is playing because the clarinet and the bass overlap their ranges and the harp can be a melodic, a chordal, and a percussive instrument. When they commission works, they started with their friends from Cambridge and have built on those relationships so that they now have commissioned over 60 works. 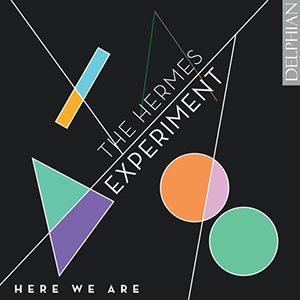 When we discussed working with young composers, clarinetist Oliver Pashley said that they were astounded by the invention shown by the composers and went on to say that “most pieces we receive we play again.” This is strong testimony to the quality of the response that composers give to the challenge of this unique ensemble.

In their first album, they have music by Emily Hall, Misha Mullov-Abbado, Errollyn Wallen, Freya Waley-Cohen, Joel Rust, Oliver Leith, Anna Meredith, Josephine Stephenson, and Giles Swayne. Of note is the number of women composers that they’ve been working with.

In performance, an entire evening of vocal music can be very hard on the singer, so they’ve been enlarging their repertoire with music for the instrumental ensemble alone, with trio and duo settings.

When you watch their video, you hear how the timbres meld together – the voice and the clarinet, the high notes on the double bass, and then the percussive strikes of the harp as a contrast. This is contemporary music, but not as you’ve heard it before.

It’s the kind of ensemble to make you rethink the possibilities of chamber music, of modern music, and appreciate the beauty that they have created.