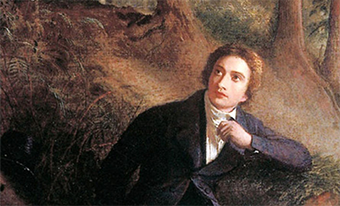 Fanny Brawne met John Keats at Wentworth Place in November 1818. She was described as “small, her eyes were blue and often enhanced by blue ribbons in her brown hair… She was not conventionally beautiful; her nose was a little too aquiline, her face too pale and thin… But she knew the value of elegance, enjoyed music, and books were her favorite topic of conversation.” 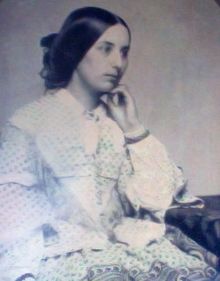 Keats mentioned Fanny to his brother George in December 1818, describing her “I think she is beautiful, elegant, graceful, silly, fashionable and strange… She is about my height—with a fine style of countenance of the lengthen’d sort—she wants sentiment in every feature—she manages to make her hair look well—her nostrils are fine—though a little painful—her mouth is bad and good—her profile is better than her full-face which indeed is not full but pale and thin without showing any bone—Her shape is very graceful and so are her movements—her arms are good her hands badish—her feet tolerable—she is not seventeen—but she is ignorant.” In no time at all, Keats fell completely in love with Fanny and he “transfigures her into a goddess-figure he needed to worship.” He finished the ballad “La Belle Dame sans Merci” in the early spring of 1819, and it reflects his love for his neighbor Fanny Brawne, and simultaneously his awareness of impending death.


O what can ail thee, knight-at-arms,
Alone and palely loitering?
The sedge has withered from the lake,
And no birds sing.

O what can ail thee, knight-at-arms,
So haggard, and so woe-begone?
The squirrel’s granary is full,
And the harvest’s done.

I see a lily on thy brow,
With anguish moist and fever-dew,
And on thy cheeks a fading rose
Fast withereth too.

I met a lady in the meads,
Full beautiful—a faery’s child,
Her hair was long, her foot was light,
And her eyes were wild. 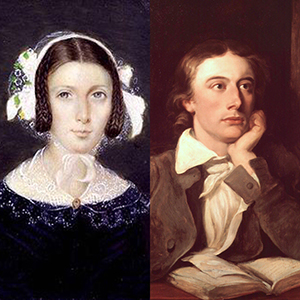 Keats’ anguish is written into the predicament of a dying medieval knight, the poet’s principal character. Structured after the medieval genre of the ballad revived by the romantic poets, Keats sets his simple story of love and death in a bleak wintry landscape. Keats does not identify his questioner, or the knight, or the destructively beautiful lady; a femme fatale who attracts lovers only to destroy them by her supernatural powers. The mix of literary and emotional forces influencing Keats at the time reflects his heat of passion for Fanny, with the fever of death hanging over him.


I made a garland for her head,
And bracelets too, and fragrant zone;
She looked at me as she did love,
And made sweet moan

I set her on my pacing steed,
And nothing else saw all day long,
For sidelong would she bend, and sing
A faery’s song.

She found me roots of relish sweet,
And honey wild, and manna-dew,
And sure in language strange she said—
‘I love thee true’.

She took me to her Elfin grot,
And there she wept and sighed full sore,
And there I shut her wild wild eyes
With kisses four.

In just a couple of lines of poetry, Keats creates a woman who is at once beautiful, erotically attractive, and deadly. A number of critics have interpreted this poem as Keats’ “personal rebellion against the pains of love.” In his letter and poems Keats discloses that he did experience the pains of the loss of freedom that came with falling in love. He did resent that pain, however, he also regaled in the pleasures of idealized love.


And there she lullèd me asleep,
And there I dreamed—Ah! woe betide!—
The latest dream I ever dreamt
On the cold hill side.

I saw pale kings and princes too,
Pale warriors, death-pale were they all;
They cried—‘La Belle Dame sans Merci
Thee hath in thrall!’
I saw their starved lips in the gloam,
With horrid warning gapèd wide,
And I awoke and found me here,
On the cold hill’s side.

And this is why I sojourn here,
Alone and palely loitering,
Though the sedge is withered from the lake,
And no birds sing. 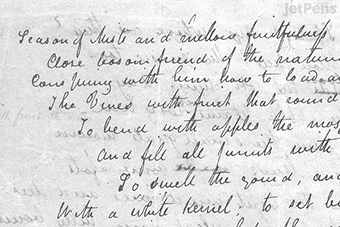 In the end, the knight finds himself in hell through the common gothic transport of a dream. He is surrounded by all of the lady’s previous victims, including kings, princes and warriors. The knight’s predicament, being abandoned and already living a posthumous existence, is how Keats saw himself in the last moths of his life just two years later. Keats did propose to Fanny Brawne in October 1819, and she accepted. However, within a couple of months his doctors urged him to relocate to Italy, as another English winter might prove deadly. He visited Wentworth Place for the last time on 10 August 1820. Keats’ love for Fanny remained unconsummated, but he wrote countless love letters to her from Rome. Sadly, by 23 February 1821 Keats had passed away.