In Tune Arts
The Funeral of Reynard the Fox
by Maureen Buja September 17th, 2022

The character of the trickster fox is everywhere in folktales from around the world. Sometimes he’s evil, but most often he’s a trickster, known for being cunning, wily, and resourceful. Their first mention comes in the fables of Aesop, in 4 BC, and these are carried forward through the 12th century when the character of Reynard emerges.

Reynard is a trickster red fox. The stories that came out starting in the 12th century place him in medieval literature as a parody of the courtly love stories. Reynard is treated in the tales as though he is human and lives in a world with other talking animals. The situations in the stories are set up such that people reading or hearing them can make parallels with their own lives.

When his time for trickery is up, one of the standard situations in the stories would be an elaborate funeral, attended by friends and enemies. The enemies deliver funeral orations full of insincerity that are then acted upon by the not-so-dead Reynard as he takes his revenge.

In the marginalia of a 13th-century Book of Hours held in the Walters Art Museum in Baltimore, there’s a procession of Reynard’s friends and enemies going to his funeral. What’s of interest to us is that his animal associates are all playing musical instruments as they process across the bottom of the pages.

The Walters MS W. 102 was created in England at the end of the 13th century for a now-unknown patron. The book is incomplete and, over time, has been misbound, with sections out of order. These books of prayers for the canonical hours were often lavishly illustrated, and this one is no exception. On the first page of the manuscript we can see not only lavish use of red and black ink but also blue, grey and white ink in the initials and the decoration. 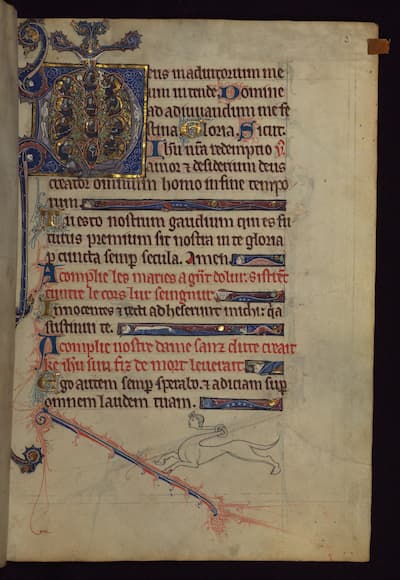 Gold has been applied and empty spaces are filled with illustrations, such as in the capital “D” initial and in the bottom margin. The illustration in the letter is that of the Tree of Jesse, depicting the ancestors of Jesus. 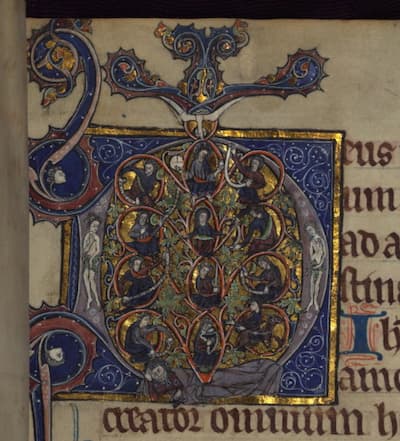 At folio 73, the procession for Reynard’s funeral begins, simply with a single picture at the bottom of the page. In the world of Reynard, his friends all have names: Reynard the Fox, Isengrim the Wolf, Tibert the Cat, King Noble the Lion, Bruin the Bear, Grimbard the Badger, Baldwin the Ass, Hirsent the She-wolf, Kyward the Hare, Chanticleer the Cock, Bellin the Ram, and Martin the Ape and many of them are in this procession playing musical instruments. 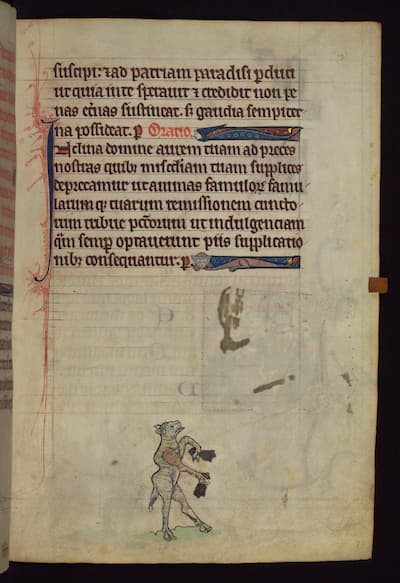 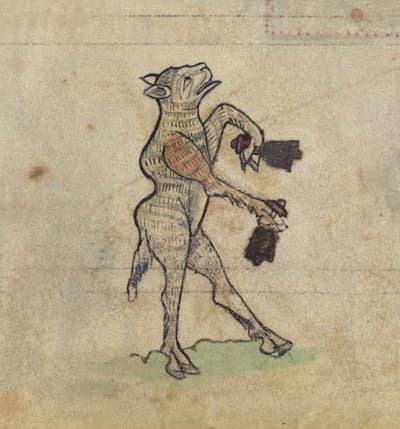 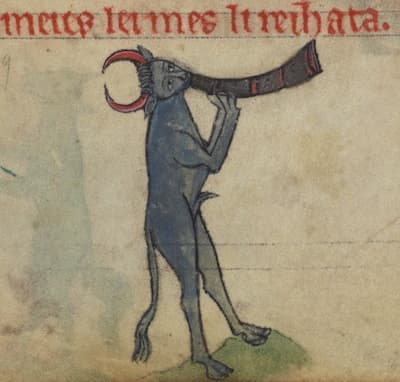 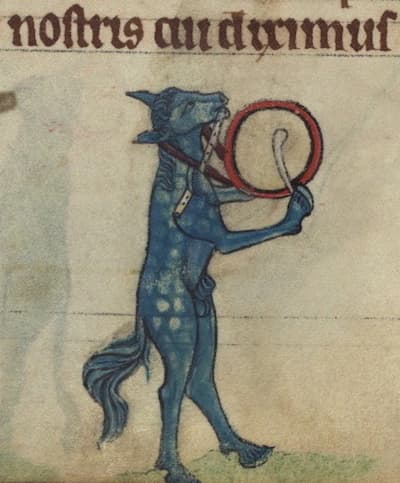 Horse playing a pipe and tabor, detail from fol. 74v 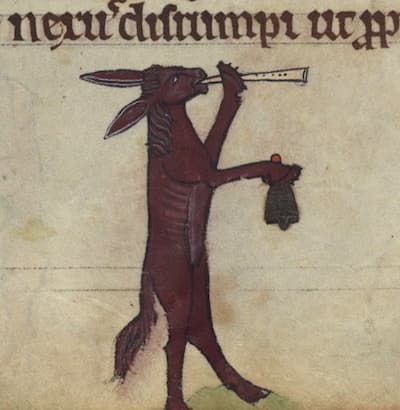 Baldwin the Ass playing a pipe and bell, detail from fol. 75r 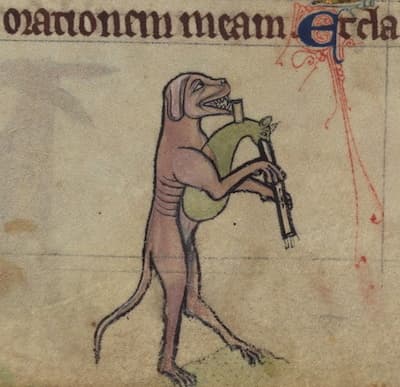 Note that the dog is playing bagpipes that seem to have a mouse head. Regular bagpipes used to be made out of the body of a sheep, but this instrument seems much simpler.


The two animals carrying Reynard’s bier are split across a page opening, with Brchimer the Stag on the left and Tibert the Cat on the fight. Reynard is covered with a blue cloth, with only his head and tail visible. 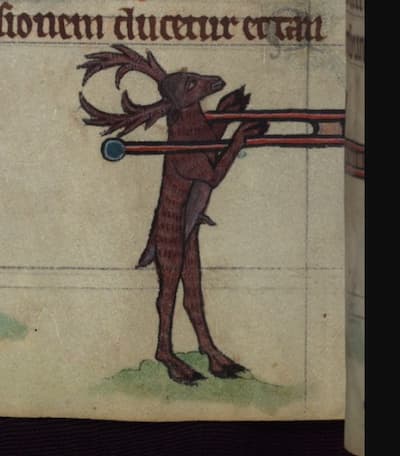 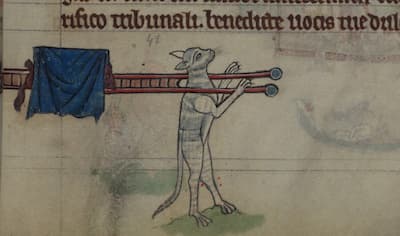 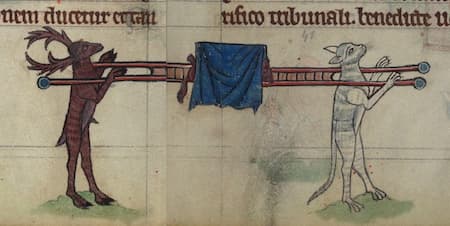 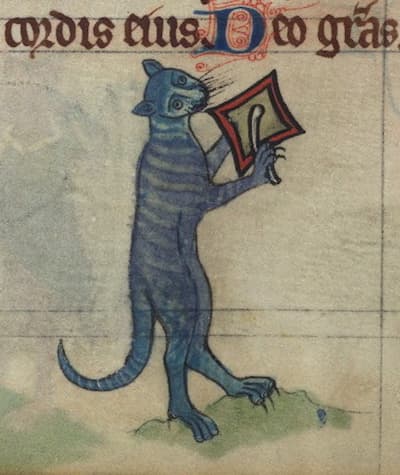 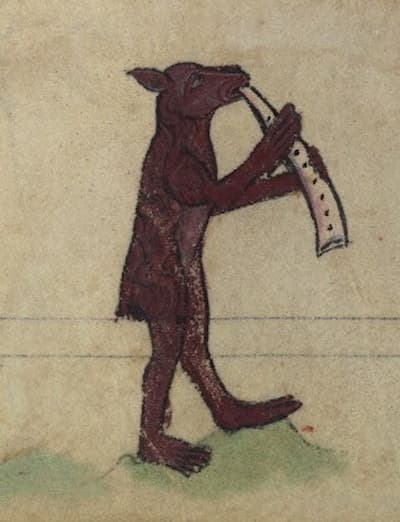 Bruin the Bear blowing a cornetto, detail from fol. 79v 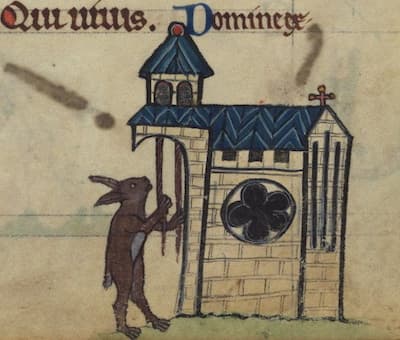 
As part of the images of animals in the marginalia being a vision of the world turned upside down, this funerary procession is also backwards. Instead of starting with the Ram and his bell at the beginning, we should turn to the end of the procession to see the Hare tolling the church bells at the beginning. When we start this procession on folio 73r, we are really at the end of the parade. There are other animals in the procession but who do not carry musical instruments: Reynard’s principal enemy, Ysengin the Wolf appears as a bishop. Chanticleer the Cock carries the incense censor. A Boar is shown with a scythe, preparing the ground for the grave.

What every reader would know is what happens next: Reynard leaps out alive and revenges himself on his enemies (again). Reynard is the clever peasant-hero and his enemies are representatives of the church or the wealthy, and Reynard will always win.