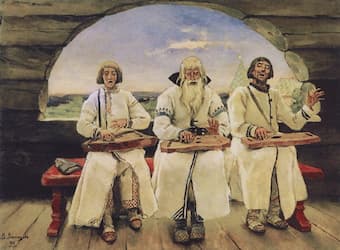 One of Rimsky-Korsakov’s most beloved operas in Russia was Sadko, a tale of a musician-fisherman who makes good. This opera was given its premiere in 1896 and was staged in Moscow in 1898.

The opera’s libretto was written by the composer, based on traditional heroic ballads, known as bylinda. Written not in acts, but in seven scenes, the opera takes us from the poor musician Sadko’s humiliation by the wealthy merchants of Novgorod to his triumphal return from the realm of the sea king as a rich ship owner.

When we first see him, Sadko is a gusli player, but is shown up by a gusli singer from Kiev. His song about improving the city is rejected by the merchants and they make fun of him. 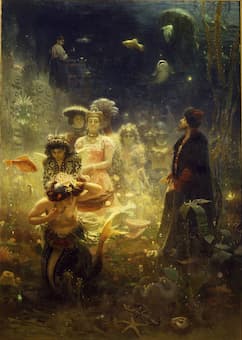 Singing by the sea, he charms the Sea King’s daughter, Volkhova, and she leads him to three golden fish. He marries Volkhova and the wedding celebrations are so boisterous that the Sea King’s undersea castle is destroyed in a storm. Volkhova returns Sadko home to his wife and turns into a river to connect Novgorod to the sea and make it more prosperous (the same idea Sadko had told to the merchants that made them revile him).

Twenty years before he created his opera, Rimsky-Korsakov had been playing around with the Sadko idea and created a symphonic poem on the stories. Entitled initially as Episode from the Legend of Sadko, he revised the work a couple of times more before completing it finally in 1892 as Sadko–Musical Picture. This symphonic poem, thought to be the first of the genre in Russian music, follows a simple narrative. It begins with the sea before Sadko is cast adrift. He descends to the realm of the Sea King and, just as in the opera, the celebration of the marriage of Sadko and Volkhova brings up a storm. The work ends with the sea returning to its calm.


The opera is on a grand scale and is best known for its “Song of the Indian Guest.” This is years after the initial symphonic poem and it’s interesting to compare Rimsky-Korsakov’s growth in those two decades. The opera is considered the peak of Rimsky-Korsakov’s craft and his powers of orchestration are well illustrated throughout.