In Tune Arts
The Arts and Music in the Early 20th Century
by Ursula Rehn Wolfman October 14th, 2011 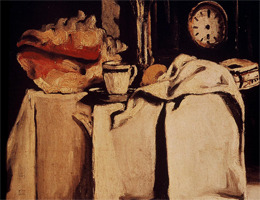 In their respective fields, Paul Cézanne and Claude Debussy influenced the artists of the early 20th century, which found their counterparts in intellectual circles formed around writers and poets such as Stéphane Mallarmé, Guillaume Apollinaire, Jean Cocteau, Marcel Proust and André Breton. Jean Cocteau, in particular, with his interests in the Ballets Russes, Stravinsky and the compositions of Eric Satie, brought many of these artists and their ideas together.

In painting, Cézanne, in his still-life ‘The Black Clock’ and ‘Still-life with a Peppermint Bottle’, pointed the way. Contrary to what we have seen in Baroque era still-lives, which always would refer to the fleeting nature of objects and the viewer to consider his salvation in eternity, in Cézanne’s paintings, objects are present only to be painted. There is no story, no interpretation possible: the ‘Black Clock’ does not tell time; the relationship between it, the cup and the conch shell is distorted and the table cloth rises up to underline the flatness of the canvas, creating pyramid, cube and circles which are at the basis of Cézanne’s concept of painting. 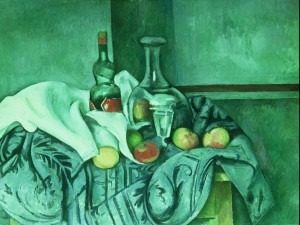 In ‘Still-life with the Peppermint Bottle’, Cézanne again questions the space represented, deconstructing the bottle itself and breaking its surface into rectangles. The question is therefore posed: what exactly is reflected in the carafe. Is the green apple in the carafe behind it or in it? It is certainly not in front of it. Also, the two sides of the carafe are shaped completely differently. Cézanne uses color to construct these objects, applying it to create their material depth and thus liberating it from the object. This very fact will, of course, be taken up by subsequent painters in the 20th century, who would abandon representation all together. 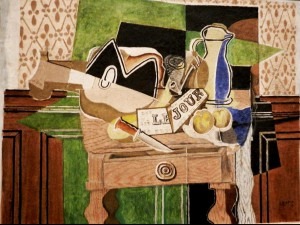 In 1907, Picasso painted ‘Les Demoiselles d’Avignon’, inspired by an exhibition of African masks at the Museé de Trocadéro. Similar masks appear on Picasso’s women, showing different angles, but all seen frontally on the level surface of the canvas. Subsequently, Picasso and Georges Braque would continue to disrupt the visual space of painting with their collages of ‘found’ objects (wallpaper, newspapers, music sheets, string, sand) and snippets of words which could be given multiple meanings, (jour, journal, etc…) forming parts of violins and guitars amongst other divers things. Their ‘Analytic and Synthetic Cubism’ would take them also further and further away from objects depicted in a known, pictorial space putting everything and itself into question. 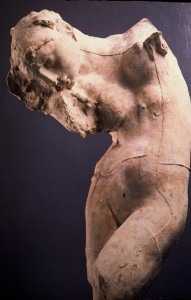 August Rodin with his sculptures emphasizes the question of sculptural space. His ‘Female Plaster Cast’ shows a sculpture in the process of becoming, but leaves the plaster lines visible, suggesting that the sculpture is both incomplete and yet finished. Another sculpture, the ‘Bronze Torso’ of a man reflects the fragmentary nature of the created object. Fragments began now exist in and by themselves, a development presaged by the art of Japan of the 19th century, where, for instance, the branch of a cherry tree exists without reference to the complete tree. Many of Rodin’s sculptures show the unfinished bloc of marble, from which the sculpture emerges as one of Baudelaire’s poems says, “like a dream in stone” (one of the verses of his poem ‘La Beauté’ is inscribed on a Rodin sculpture: “Je suis belle, ô mortels, comme un rêve de pierre/Et mon sein où chacun s’est meurtrie tour à tour/Est fait pour inspirer au poète un amour/Eternel et muet comme la matière” — I am beautiful, oh mortals, like a dream in stone/ and my breast where everyone in turn has been bruised/Is made to inspire a poet with love/Eternal and mute just as matter). 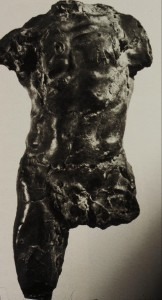 In poetry, the works of Stéphane Mallarmé, in particular his poem ‘Un Coup de dés jamais n’abolira le hasard’ (The throw of the dice never abolishes chance) shows us the explosion of the word on the page. Writing is considered a constellation, words can be read in different directions, and different rhymes and alliterations open again multiple possibilities of interpretation. Space and time are of course also the very essence of Marcel Proust’s ‘A la Recherche du Temps Perdu’ (In Search of Lost Time – a better translation than ‘Remembrance of Things Past’ – where the end of the work is really the beginning – the very act of writing, the act of creation. 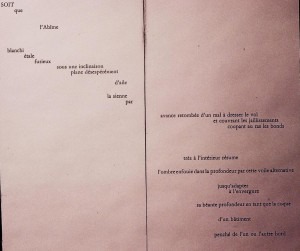 As mentioned above, music brought many of the artists together such as with the ballet, ‘Parade’ in 1917, a one-act ballet, choreographed by Léonide Massine (Ballets Russes – Serge Diaghilev), based on a poem by Jean Cocteau, the music written by Eric Satie and the costumes, décor and the stage curtain designed by Picasso. The music in Parade includes a ragtime score, café chansons, dance hall melodies, assorted sounds of engines, typewriters and rhythmic stomping – again establishing links to Picasso’s Cubist Guitar creations, questioning ‘high and low’ art, ‘real and found objects’, and extending the metaphor of using already created pieces to construct a ‘new’ space and stirring the imagination in viewer and listener alike.

Satie’s compositions, such as his ‘Gymnopédies’ inspired many of the young composers of mid-20th century, such as John Cage and Philip Glass. Minimalist in their structure (based on Greek dances of young men), they seem to return to the very essence of music, single notes in musical space, just as the stroke of a pencil or a brush of paint in black on white. Robert Motherwell in his ‘Elegy to the Spanish Republic’ evokes the same impression, using black painted abstract forms on white canvas, similar to black notes on a white sheet of paper, their interpretation existing only in the performance of the piece or the reading of the canvas. Motherwell says about his series of ‘Elegies’: “they use an essential component of pictorial language that is as basic as the polyphonic rhythms of Medieval or African or Oriental music”.

Cocteau was also instrumental in bringing together the group of ‘Les Six’: Darius Milhaud, Francis Poulenc, Arthur Honegger, Georges Auric, Louis Durey and Germaine Tailleferre. They would often meet at the Gaya Bar, where they listened to jazz. Jazz, sounds produced by ‘found’ objects, typewriters, bicycle bells, car horns would find their way into the works of these composers. In fact, Georges Auric says in the first issue of ‘Le Coq’, published in the early parts of 1921: “….we have the circus, the music hall, travelling theatre parades, and the American orchestras. How can one forget the Casino de Paris or the little circus on the Boulevard Saint Jacques with its trombones and drums? It has been an awakening for us.” Circus themes were, of course, also the inspiration of many works of Degas, Toulouse-Lautrec and Picasso.

The early part of the 20th century brought together an extraordinary group of talented artists, writers and musicians, whose impact would continue to be felt throughout the century and well into our time.