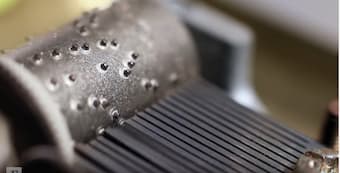 The truck comes down the street, playing its little melody, summoning all the little (and big) kids out for ICE CREAM. The Mister Softee ice cream trucks first hit the streets of Philadelphia in 1956 and now operate in about 15 states in the US.

The trucks played a little melody that was instantly recognizable to all who hear and was an effective marketing tool. The original melody was written by Arthur Pryor (1869-1942), who had been a trombone soloist in the Sousa band before leading his own band until 1909. As a composer, the music he’s best known for is a novelty piece called The Whistler and His Dog.


In 1960, an advertising man in Philadelphia took that melody and gave it Mister Softee words for a television commercial. He retitled it Jingles and Chimes. The piece was so successful, it was then loaded onto the trucks to play, first as a music box, then as a recording.

The music boxes wore out after a year and started sounding terrible so the switch to a recording was welcomed by everyone.

The creamiest dreamiest soft ice cream,
You get from Mister Softee
For a refreshing delight supreme
Look for Mister Softee

The creamiest, dreamiest soft ice cream
You get from Mister Softee
For a refreshing delight supreme
Look for Mister Softee 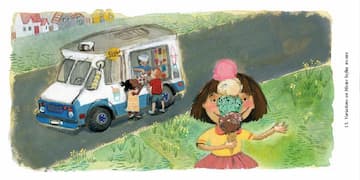 In New York, the sound of summer was the sound of the ice cream truck but in 2002, under the city crackdown on street noise, Mayor Bloomberg had the jingles banned. Public opposition, however, had him reinstate the song, but only while the truck was moving. When it was parked, the tune had to be turned off (to the sorrow of the children but to the delight of the apartments upstairs).

American composer Gerald Busby made a short variation out it.


What’s your creamiest dreamiest summer sound? The waves at the beach? The buzzing of bees? The wash of the lawn sprinkler? Or is it something associated with ICE CREAM?