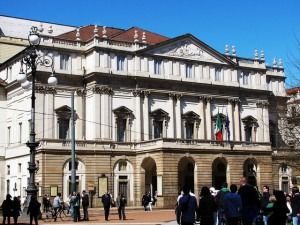 Every year on 7 December something magical happens in the Italian city of Milan. For one, the city celebrates its patron saint Ambrose (340-397). A revered archbishop, he is widely recognized as one of the most influential ecclesiastical figures who contributed significantly to the theology and doctrine of the Catholic Church. On that very day, the “Teatro alla Scala,” one of the most iconic and significant performing venues officially opens its season, and it has done so ever since 3 August 1778.

Built to replace the Royal Ducal Theatre, which was destroyed by fire in 1776, the new opera house was built on the church ground of Saint Mary de la Scala, from which it derived its name. The neoclassical architect Giuseppe Piermarini, who had vast experience designing and building everything from libraries to royal palaces, was hired to design a structure entirely devoted to music. Over a period of two years the theatre was completed and featured 3000 seats organized into 678 stalls, arranged in six tiers of boxes and crowned by two galleries. The massive costs for building such an enormous structure were financed by the sale of theater boxes, which in turn were lavishly decorated by their owners. Originally, the main floor had no seating arrangements and audiences watched performances standing up. However, main-floor audiences also watched what was going on in the private boxes, as La Scala became the meeting place for Milanese wealth and nobility. While the musical performances certainly held some kind of attraction, it was equally fascinating to try and get a glimpse of who had been invited into which box, either overtly or secretly. The 19th-century French writer Marie-Henri Beyle, better know under his pen name “Stendhal,” provided his impressions in his novel La Chartreuse de Parme (The Charterhouse of Parma), published in 1839. A literary exploration of human nature and psychology, Stendhal writes in the voice of Count Mosca, “I arrive at seven in the evening, harassed by fatigue, and run to La Scala…the only society is there.” Tellingly, Count Mosca meets Gina in a box at the opera and falls in love. Clearly, La Scala functioned as Milan’s salon, and the smartest man from Parma must go there in order to meet the woman “destined to become the chief ornament of Parma society.” 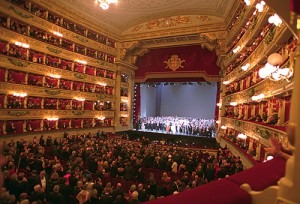 Even today, a performance at La Scala is a glittering and sparkling social occasion, intermingling fashionable Milanese with wide-eyed tourists from around the globe. Yet, as Mary Shelly reported in 1840, La Scala was also used for other purposes. “At the Opera they were giving the Templario. Unfortunately, as is well known, the theatre of La Scala serves, not only as the universal drawing-room for all the society of Milan, but every sort of trading transaction, from horse-dealing to stock-jobbing, is carried on in the pit; so that brief and far between are the snatches of melody one can catch.” It must have been quite a sight, illuminated by 84 oil lamps mounted on the stage and another thousand distributed throughout the theater, gamblers would have plied their trade in the foyer, the local farmer was trying to sell his donkey and a wealthy nobleman was having his way with a woman other than his wife in his bosh theater box. By 1883, electric lights had replaced the hazardous oil and gas lamps, and the original theatre underwent a thorough renovation in 1907. The structure also had to be completely rebuilt in the aftermath of WWII. Under the guidance of Mario Botta, La Scala underwent a further renovation in 2002, bringing its facilities up-to-date with 21st-century demands. Social and business activities aside — just in case you were wondering — this esteemed opera house also premiered an enormous number of highly significant works, allowing us to trace and witness the growth of Italian opera seria. 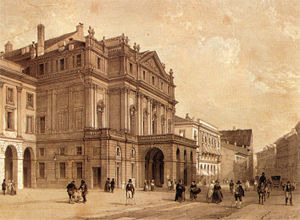 In August 1778, La Scala opened with the world premier of Antonio Salieri’s L’Europa riconosciuta. Salieri was not only a highly regarded composer and teacher — he taught Franz Schubert, Ludwig van Beethoven and Franz Liszt — but a seminal figure in the development of 18th-century opera who shaped many features of the common operatic vocabulary. However, it was the operatic efforts of Gioachino Rossini, Vincenzo Bellini and Gaetano Donizetti that established La Scala as one of the most prominent musical venues in the 19th century. Rossini’s La Pietra del paragon premiered in 1812, as did Bellini’s Norma in 1831 and Donizetti’s Lucrezia Borgia in 1833, among numerous other works. La Scala had a special relationship with Giuseppe Verdi. After it premiered Oberto in 1839, Un giorno di regno in 1840, and most notably Nabucco in 1842, a dispute arose over the performance of Giovanna d’Arco in 1845. According to the composer, the orchestra had corrupted some of his music, and he forbade further productions of his works at La Scala. Verdi and La Scala finally kissed and made up forty years later, and his last operas Otello and Falstaff premiered in 1887 and 1893, respectively. Madame Butterfly and Turandot by Giacomo Puccini first saw performances in 1904 and 1926, as did the Dialogues of the Carmelites by Francis Poulenc and a cycle of operas devoted to “Light” by Karlheinz Stockhausen. Most recently, La Scala premiered Teneke — an opera based on a Turkish subject — by the Bolognese composer Fabio Vacchi in 2007. It goes without saying that over the last 200 years La Scala has also hosted the finest singers, dancers and conductors from around the world. Presently La Scala also houses a Theatre Museum displaying various artifacts and documents pertaining to the history of the house, and with the inclusion of the Accademia Teatro alla Scala — an associate school that provides professional training in music, dance, stage craft and stage management — the future of this venerable theater seems entirely secure.