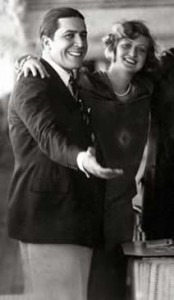 In the years before the First World War the Argentinian tango swept like wildfire throughout the world. And Carlos Gardel (1890-1935) was the one authentic superstar of his time. Gardel was the greatest singer of tangos who ever lived, and probably the finest individual talent ever to be associated with this particular form of popular music. Born in France, Gardel revolutionized tango and became a symbol of the immigrant success. “He was a boy from the middle classes, a neighbourhood singer who captivated the world.” Much of his popularity was based on his attractiveness to woman, and he consciously projected an aura that he was available. Publically, he became a man of mysterious passions and romantic intrigues, but “a girlfriend, a lover or simply a woman that permanently accompanied him was never known.”

However, Gardel had one major girlfriend, but he meticulously kept their love life a secret. Her name was Isabel del Valle, and she hailed from the neighbourhood of Constitución in Buenos Aires. Isabel studied singing and made a few public appearances. It was in late 1920 that Gardel saw Isabel perform at the Esmeralda Theater in Buenos Aires. She was only 14, but he fell head over heals in love. Isabel later recalled, “Carlos was 20 years older but I already had the body of a woman. By the way, who cares about a difference of 20 years? I confess that I never cared about those details. I crazily fell in love with Carlos… And I know that he loved me too, that I was the only love of his life even though people thought he had a lot of love affairs.”

Gardel quickly bought a comfortable house for Isabel, and he generously supported her financially. Meanwhile, Isabel’s family made sure that the relationship stayed private, and it was only known to the closest of friends. In exchange for their discretion, and because he was probably blackmailed for having a relationship with an under-aged girl, Gardel began to financially support Isabel’s entire family. Her three brothers got a considerable sum of money that helped them to put up a butcher’s shop. Isabel’s family began to urge Gardel to formalize the relationship with Isabel. In fact, as time moved on they rather forcefully advocated marriage. Despite her young age, however, Isabel was well aware that “Carlos was only married to singing.” Gardel confirmed this sentiment in a newspaper interview, stating, “Due to my career I am not fond of marriage.”

Caught between the demands of Isabel’s family and the requirements of his career, the relationship gradually deteriorated. After nearly a decade of secrecy, Gardel tearfully separated from Isabel. Isabel eventually accepted the breakup, and she remained respectful of the memory of Gardel until her dying days. However, her family could not easily come to terms with the fact that the financial stream of support was drying out. They aggressively demanded continued financial support until Gardel instructed his lawyer to stop all payments. He wrote to his attorney, “I have already told you that for me this is a finished business, definitively finished and so you have to consider it. If they want to keep me as a friend, it’s all right, otherwise I cut her breathing by not sending anything any more. So you have to tell her, especially to her family.” And in a postscript of a letter dated 23 April 1934, he added, “Make sure to tell them to leave me alone. I have done enough and I’m still doing by giving her a house and by supporting her, of course until she is settled, I don’t want to play the fool.” Following the breakup, Gardel’s name became associated with a very rich, middle-aged English widow who showered him with expensive presents, including a Rolls-Royce. And after Gardel’s untimely death in an aircraft accident in 1935, Isabel married Mario Fattoni and had one child. Isabel passed away on 4 May 1990 at age 83.